Every one knows someone with hay fever. Airborne pollens, molds, dust particles, etc. are inhaled and soon the sneezing and sniffling begins. A simple way to think of atopy for pets would be simply saying that the airborne allergen is inhaled but instead of sneezing and sniffling, the pet gets itchy skin. In fact, this was what we thought was happening for many years but the situation turns out to be more complicated. Airborne pollens, molds, dust particles etc. gain entry to the skin through a defective skin barrier, and from there their proteins are presented to the immune system. Cells of inflammation migrate back to the skin and soon the itching and scratching begins. The allergens come from the air but the itch is manifested in the skin.

Airborne particles (pollen, dander, etc.) are harmless to someone who is not allergic to them. Allergy develops in individuals who are genetically programmed to do so.

There are many reasons for pets to itch: parasites, allergy to flea bites, food allergy, secondary infection and the list goes on.

The following are findings in the history and examination of the patient that might lead to a diagnosis of atopy. In fact, meeting five criteria from this list yields an 85 percent accuracy for the diagnosis of atopic dermatitis, at least for dogs:

Young Age Of Onset
Seasonal itchiness due to atopy tends to begin early in a pet’s life (between ages 1 and 3 years in 70 percent of dogs diagnosed with atopy). Food allergy tends to begin later (more like age 5 or 6 years in dogs) or earlier (less than 6 months of age). Age at which itching first manifests is not as reliable a sign in cats as in dogs.

Good Response To Steroids
Whether the patient is a dog or cat, itchiness due to atopy responds rapidly to cortisone-type medications (prednisone, depomedrol, dexamethasone, etc.) as does itching due to insect bite allergy. Food allergy is more variable in its response; it may or may not respond well.

Chronic Or Recurring Yeast Infections In The Skin
Yeast (Malassezia pachydermatis) live on the surface of the skin normally but with all the changes allergy causes to the skin’s microenvironment, yeast will proliferate and create a stinky, thickened, pigmented skin that resembles elephant skin or even tree bark. Environmental allergy is a strong predisposing factor in developing yeast dermatitis.

Ear Margins Not Involved
Ear margin involvement is suggestive of sarcoptic mange and would lead one away from airborne allergies.

Lower Back Area Not Involved
The lower back is the flea bite zone. There are few conditions other than flea bite allergy that cause itching in this area, so if this area is involved, make sure flea control is achieved before further evaluating the skin.

Atopy is associated with irritation in certain parts of the body. In dogs these areas are:

Food allergy, which is best thought of as a form of atopic dermatitis rather than as a separate disease, has a similar irritation pattern but a different history. Sarcoptic mange also has a similar itch pattern.

In cats, the irritation pattern is not as characteristic. There are four common manifestations of atopy. Unfortunately, these same irritation patterns can be found in numerous other skin conditions and, in fact, up to 25 percent of atopic cats have multiple types of allergies. 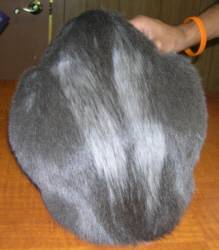 While it would be nice to have a blood test that could tell us if a pet’s itching is due to atopy, such a test does not exist. Atopy remains a clinical diagnosis, which means the diagnosis is made based on history and examination findings.

Before doing anything else, it is important to clear up secondary infections. Secondary infections involve bacteria (usually Staphylococcal) and/or yeast (Malassezia) at the site of the itchiest areas on the body. These organisms live naturally in the skin but when the skin is irritated, they gain access to inner tissue layers and proliferate. Sometimes they actually come to generate further allergic response in the skin. These infections tend to recur and are the usual cause of recurrence of itch symptoms in a patient who was previously controlled.

Many patients will not be particularly itchy in between infection flare-ups so it is especially important that these be controlled.

Hyposensitization, more commonly known as allergy shots, is by far the treatment of choice for atopic dermatitis. All the other medications are basically just itch relief; only hyposensitization actually changes the immune system. Some dogs are eventually able to go off all treatment and are no longer allergic after they have been on hyposensitization long enough. Most dogs are at least much better and require fewer additional treatments. 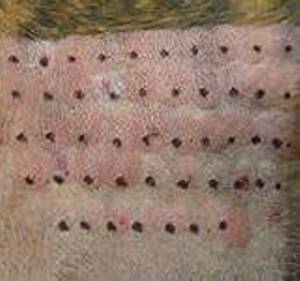 These cortisone-type medications (prednisone, prednisolone, triamcinolone, dexamethasone, etc.) tend to be useful as the first line of defense against itchy skin. A higher dose is used at first but this is quickly tapered down once the condition is controlled. Prednisone, for example, is given every other day so as to allow the pet one day of recovery from the prednisone’s hormonal actions. An atopic pet will usually respond within days.

Steroid hormones are useful for acute flare-ups as well as for long-term management of atopic dermatitis (assuming limits are placed on how long they are used).

Cyclosporine is a modulator of the immune response that has been helpful in both human and non-human organ transplant patients. It has been found to be reliably effective in atopic dermatitis and does not carry the unpleasant side effect profile that steroids do. That said, it is not without side effects of its own. It is used mostly in dogs but can also be used in cats. It is for long-term management and is not helpful for acute flare up control.

This is a new medication best used for itch relief and blocking itch symptoms. It is popular as it works fast. It does not address the inflammation in the skin; it just stops the itch sensation. This means that infection still needs to be controlled. For more details visit: Apoqueldogs.com

This is a new treatment that uses vaccine technology to eliminate one of the main mediators of itch sensation. The injections provides relief from itching for 1 month in 80 percent of dogs and show effectiveness usually within 24 hours of the injection. For many dogs, relief of itch stops the vicious cycle of itch/infection. Again, any infections still need treatment but the sensation of itch is usually controlled.

Proper Coat Hygiene/Removing Allergens From The Environment If Possible

These products are NOT just adding oil to the pet’s food. Instead, these special fatty acids act as medications, disrupting the production of inflammatory chemicals within the skin. By using these supplements, it may be possible to postpone the need for steroids/cortisones or reduce the dose of steroid needed to control symptoms. It takes a good 6 weeks to build up enough omega 3 fatty acids in the body to see a difference.

Antihistamines have been popular for many years for pets, and it seems their effectiveness does not stand up to scrutiny. They do not provide neither short-term relief nor reliable long-term relief. They may be helpful in combination with other products in that their use may reduce the need for other products. They may work better in cats than in dogs.

Allergies are additive. This means that when a patient has multiple allergies, each allergy alone may not be enough to cause itching but the allergies all active together probably will. Consequently, taking away one of the active allergies may be enough to allergy reduction to resolve the itching. Flea bite allergy is extremely common. We now have so many effective products available that there is no reason for an animal to contend with a flea bite allergy. This simple bit of therapy (flea control) may be enough to bring the pet below her itch threshold without having to contend with any of the therapies listed above.

Itchy skin has been the scourge of dogs and cats for decades, if not centuries. We are now armed with a great understanding of immunology and have many tools to address allergy symptoms. Your veterinarian can guide you further with regard to a proper regimen.