Aural Hematoma in Dogs and Cats

A hematoma is swelling created by a broken blood vessel after bleeding has occurred inside a tissue. Hematomas in the earflaps (aural hematomas) occur when head shaking breaks a blood vessel within the earflap. The earflap may partially or completely swell with blood. The swelling may be so large that the opening of the ear canal is occluded. The extra weight of the earflap may be uncomfortable and may lead to a permanent change in the carriage of the ears. This condition is more common in dogs but can occur in cats as well. The earflap will feel fluctuant and fluid-filled, like a water balloon.

A small hematoma may not actually be a problem and may not require repair. There are several situations where the hematoma should be repaired.

What Do We Do To Relieve It?

There are probably as many ways of correcting ear hematomas as there are veterinarians. The following are some commonly performed procedures.

Aspiration
This procedure involves simply using a syringe to remove the fluid contents from the hematoma. The problem is that a space is left behind when the fluid is removed and this space readily refills with more fluid leading to only temporary results. The benefits of the aspiration method are that it is inexpensive and relatively easy to perform but the disadvantages are that it may introduce infection and may require multiple attempts. If the clot in the hematoma is already well organized and on its way to scarring, there may not be much fluid left to aspirate and the technique may not work at all. Usually other methods are utilized.

Pie-Crusting Sutures
Here, an incision is made in the earflap surgically. The hematoma is drained of fluid and blood clots. To prevent the hematoma from refilling with fluid, multiple sutures are placed in the hematoma area either vertically or horizontally, either partly or completely through the earflap, with or without ear cartilage removal. Sometimes bandages are applied post-operatively, sometimes not. Sutures are generally left in place for three weeks to allow good scarring to take place so that refilling will not occur. The earflap is essentially quilted to close any space where fluid might refill. 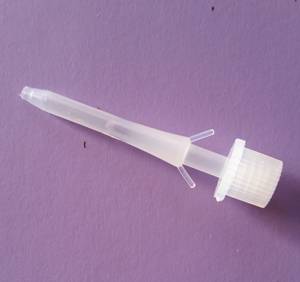 A teat cannula is a small device used in the treatment of udder inflammation in cattle. It can be placed in the opening of the teat to allow drainage of milk or infected discharges. Teat cannulas can also be surgically placed in a dog’s aural hematoma if the earflap is large enough to accommodate the device. The hematoma is drained of fluids and allowed to heal over the next several weeks. This method is generally successful but does involve the dog tolerating a gadget inserted in its earflap for several weeks as well as accompanying fluid drainage.

What If There Is A Concurrent Ear Infection?

What If We Leave It Alone?

If left alone, an ear hematoma will resolve by itself. The fluid will be re-absorbed back into the body and the earflap will no longer bulge. The problem is that a lot of scarring is associated with this process and the ear is often not cosmetically appealing afterwards (i.e. it becomes a “cauliflower” ear). Resolution of a large hematoma can take several months during which it may be uncomfortable for the pet. If the patient is a poor anesthetic risk, it is certainly reasonable to forgo surgery. 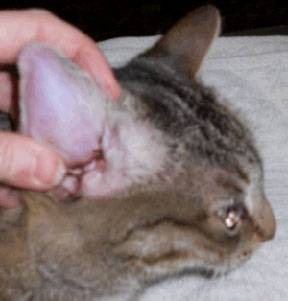 The feline situation is somewhat more complicated than in dogs largely because the cartilage in the feline ear is more sensitive to inflammation and scarring is more severe. This makes the untreated hematoma more likely to form a permanently narrowed ear canal and long-term ear infection potential. Feline ear cartilage tends to experience more healing deformity than canine ear cartilage and more curling and softening of the thinner pinnal areas are seen.

What this comes down to is that there is less leeway in letting the ear heal on its own in cats than dogs. Surgical repair is especially important as there is a greater tendency for the a cat’s canal to narrow. That said, a more natural cosmetic appearance of the actual ear flap is harder to achieve in cat than dogs. It is more important to focus on the function. 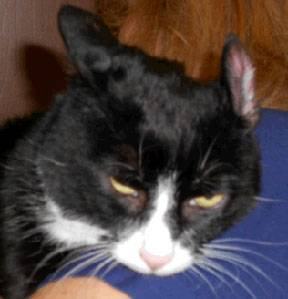