Bacterial diarrheas are generally a nuisance for the adult animal but can be lethal to a small puppy, kitten, or even a human baby.  Most of these problems stem from contaminated food or fecal contaminated environment. Raw food diets for pets dramatically increase the risk of human exposure. Since these conditions are also human diseases, it is helpful to have some understanding of what they are even if there are no young puppies or kittens or immune-suppressed people or animals at home. In general, when it comes to bacterial diarrhea, the smaller and less mature the patient is, the more serious the infection. 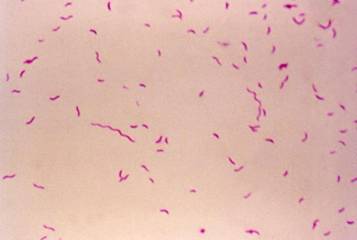 Campylobacter species are a group of bacteria capable of causing diarrhea in dogs, cats, humans, and other animals. They have a unique curved appearance under the microscope and are said to be sea gull-shaped.  They are difficult to isolate as they grow in conditions of low oxygen (making them microaerophilic as opposed to being aerobic or anaerobic bacteria). With regard to pets, Campylobacter are generally a problem for the very young. Puppies and kittens do not have mature immune systems yet; plus, because they are small, fluid loss from diarrhea hits them much harder. Furthermore, puppies and kittens are more likely to be housed in groups  where fecal cross-contamination is common so they may be more likely to become infected than adult animals.   Adult animals commonly have Campylobacter organisms living in their intestines but they do not experience any sickness due to it.

In humans, Campylobacter infection is a leading cause of gastrointestinal (GI) disease; infected dogs and cats can carry the organism and spread it even if they do not have symptoms themselves.  For this reason, pets used for therapy in assisted living communities and similar situations should be screened for Campylobacter by fecal culture before exposure to people with suppressed immunity. Humans are also infected by consumption of contaminated food, water, or raw milk; only 6% of human Campylobacter infections are attributed to dog exposure.  That said, exposure to a dog with diarrhea triples a person’s risk for developing enteritis from Campylobacter jejuni or Campylobacter coli. Studies screening pet animals for inapparent Campylobacter infections have found surprisingly high incidences of inapparent infection. In one study in the Midwest, 24% of 152 healthy cats were positive, for example.

After one consumes Campylobacter organisms, they travel to the lower small intestine, attach, and begin to multiply.  They produce a toxin that destroys the lining of the intestine with the result being a bloody, mucous diarrhea (though occasionally a more watery diarrhea is described).  Sometimes a fever results, appetite becomes poor, and vomiting can occur.  Incubation is 2 to 5 days.  The organism can survive as long as a month in environmental feces.

Diagnosis is made by seeing the sea gull-shaped organisms under the microscope; however, there are so many bacterial organisms on a fecal sample that finding the culprit can be tricky. For this reason, a culture is often performed as a more accurate test. Because the organism is microaerophilic, specific culture requirements must be met; the facilities of a reference laboratory are needed.

Treatment is with appropriate antibiotics. Erythromycin is currently considered the drug of choice. 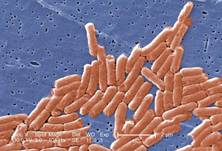 Most people are somewhat familiar with Salmonella.  They know it represents a type of food poisoning, probably know it is associated with diarrhea that can be severe, and may even know that Salmonella species are bacteria.  Most human cases of Salmonella infection cause fever, diarrhea, and cramping that go away on their own, but in children it can produce more severe disease. As with Campylobacter, the young are more susceptible to more severe illness because they are smaller and do not have mature immunity.  The same is true with puppies and kittens; adult animals are almost never affected by Salmonella infection.

There is an important exception to the “Salmonella is rare in adult dogs” rule and that is the case of dogs fed a raw food diet.   It has become popular to feed raw foods to pets with the idea that a raw food diet more closely approximates the natural diet that the feline or canine body evolved to consume, and thus such a diet should be healthier than commercially prepared foods. In fact, the cooking of food is central to removing parasites, bacteria, and bacterial toxins from food. A recent study evaluating raw food diets found that 80% of food samples contained Salmonella bacteria and that 30% of the dogs in the study were shedding Salmonella bacteria in their stool. Adult dogs are often asymptomatic but any infected animal or person will shed the organism for at least 6 weeks, thus acting as a source of exposure to other animals or people. Salmonella organisms are  difficult to remove from the environment and easily survive 3 months in soil.  Again, dogs used for therapy around the elderly or children should be cultured for Salmonella.

There are two syndromes associated with Salmonella: diarrhea and sepsis. Salmonella bacteria, once consumed, attach to the intestine and secrete toxins. The toxins produce diarrhea that can be severe and even life-threatening in the young.  If this were not bad enough, some Salmonella can produce an even more serious “part two” should these bacteria invade the body through the damaged intestine, causing a more widespread and much more serious infection..

In young animals, the syndrome resulting is similar to that of canine parvovirus, thus similar treatment is expected. 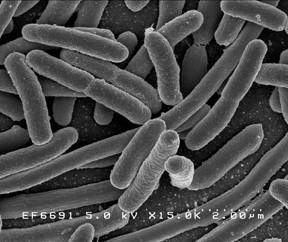 Escherichia coli may be the most common bacterial organism in the world. It lives in our intestines naturally and covers the world we live in. Unfortunately, some strains of E. coli are not so neighborly and are capable of producing diarrhea via toxin production. Like the other organisms we have discussed, this is a serious problem for the very young and more of a nuisance for adults.  There are three main types of unfriendly E. coli: Enterotoxic E. coli, enterohemorrhagic E. coli, and enteropathogenic E. coli.

Enterotoxigenic E. coli are a common cause of diarrhea in young animals as well as human infants, and are responsible for the famous traveler’s diarrhea. These bacteria produce what is called an enterotoxin in the upper small intestine. This toxin, similar to the toxin of cholera, causes the intestine cells to secrete the body’s fluid into the intestine creating spectacular watery diarrhea and what can be life-threatening dehydration for smaller living creatures.  Young pigs, cattle, and other livestock are commonly lost to this kind of dehydration. Again, the younger and smaller the patient is, the more serious this infection is.

Enteropathogenic E. coli also produce diarrhea in humans and animals. Rather than a secretory diarrhea as above, they simply destroy the intestinal cells where they attach. Diarrhea still results but it creates more damage to the intestinal lining.

Enterohemorrhagic E. coli is similar to enteropathogenic E. coli but with more associated inflammation. This type does not seem to be a problem for small animals though they can carry it asymptomatically.

It would seem that antibiotics would be the obvious treatment for a bacterial disease, yet for E. coli it is surprisingly controversial.  It seems that the use of antibiotics can enhance the synthesis of toxins by these bacteria; plus, oftentimes antibiotic use only serves to make E. coli more resistant in the GI tract. Antibiotics are generally reserved for those animals (or people) who seem the most sick or who have evidence of bacterial invasion in the bloodstream. Basically treatment is supportive care until the patient’s immune system regains the upper hand.

Bacterial diarrheas are an especially serious consideration in the very young and in the weak or compromised, be they human or non-human. It is not unusual for apparently healthy animals to carry these organisms and shed them into the environment and feeding raw foods greatly increases the risk of this kind of latent infection. If you are considering raw food diets, especially if there is someone in the home who is very young or who has a compromised immunity, discuss prevention of these infections with your veterinarian.