Most people are not familiar with the term brachycephalic, but if you own a Pug, Boston Terrier, Pekingese, Boxer, Bulldog, Shih Tzu or any one of the other breeds with pushed in or short faces, you should become familiar with this word. The word comes from Greek roots brachy, meaning short, and cephalic, meaning head.

Brachycephalic dogs have been bred so as to possess a normal lower jaw that is in proportion to their body size, and a compressed upper jaw. In producing this cosmetic appearance, we have compromised these animals in many important ways, and you as an owner must be familiar with the needs of your pet. 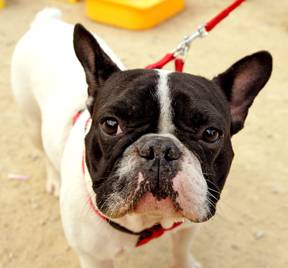 Brachycephalic breeds make a lot of snorting respiratory sounds as a matter of course simply because of the way their throats and faces are shaped. These sounds are generated from a combination of several anatomic deformities that will be described below. These deformities occur to varying degrees of severity. Most brachycephalic dogs are not hampered by their anatomy on a day-to-day basis but they do have limitations that must be recognized. Severely affected individuals require surgical intervention.

This is a fancy name for narrowed nostrils. The brachycephalic dog’s respiratory passage begins with very small, often slit-like, nasal openings for breathing. This leads to a great deal of open-mouth breathing and panting as the nasal breathing route is limited by its small opening. In selecting a puppy for adoption, it is a good idea to look at the nostril sizes on each member of the litter and look for the widest opening. Stenotic nares can be surgically corrected after age five months.

The brachycephalic dog’s tongue can be particularly thick and large, which contributes to the overall obstruction. The French and English bulldogs seem particularly predisposed to this issue. 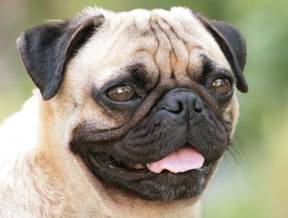 It is difficult to fit the soft tissues of the canine mouth and throat into the brachycephalic’s short face. As a result, the soft palate, which separates the nasal passage from the oral cavity, flaps loosely down into the throat, creating snorting sounds. Virtually all brachycephalics suffer from this but actual respiratory distress is rare except in English Bulldogs. The English Bulldog tends to have more severe symptoms in almost all aspects of brachycephalic syndrome. Excess barking or panting may lead to swelling in the throat that can, in turn, lead to trouble. Again, the soft palate can be surgically trimmed.

The trachea is also known as the windpipe. The brachycephalic dog’s windpipe may be dangerously narrowed in places. This condition creates tremendous anesthetic risk and should be ruled out by chest radiographs prior to any surgical procedures as anesthetic safety depends on placement of a tube in the windpipe to secure air passage. If the trachea is too small, intubation may not be possible and it is important to know this in advance of any planned procedure. The English bulldog is particularly predisposed to this anatomical defect. 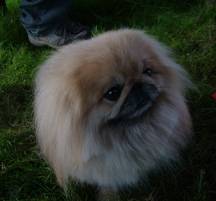 The normal larynx has two small pockets called ventricles or saccules. When a dog has increased effort to breathe, over time these little pockets will actually turn inside out inside the throat. When this occurs, the protuberances obstruct the throat. This condition can be corrected surgically; however, in many cases, it resolves on its own after the stenotic nares are corrected so surgery is generally only performed in severe situations. The pug is especially predisposed to this situation.

Because of all these upper respiratory obstructions, the brachycephalic dog pants inefficiently. A dog with a more conventional face and throat is able to pass air quickly over the tongue through panting. Saliva evaporates from the tongue as air is passed across and the blood circulating through the tongue is efficiently cooled and circulated back to the rest of the body.

In the brachycephalic dog, so much extra work is required to move the same amount of air that the airways become inflamed and swollen. This leads to a more severe obstruction, distress, and further over-heating.

Brachycephalic dogs are the most likely candidates for heat stroke.

Altogether, the upper airways of the brachycephalic dog compromise the ability to take in air. Under normal conditions the compromise is not great enough to cause a problem; however, an owner should take care not to let the dog become grossly overweight or get too hot in the summer. Be aware of what degree of snorting and sputtering is usual for your pet, and should your dog require general anesthesia or sedation, your vet may want to take extra precautions or take radiographs beforehand to assess the severity of the syndrome. Anesthetic risk is higher than usual in these breeds, though under most circumstances the necessary extra precautions are readily managed by most animal hospitals.

To be clear, brachycephalic syndrome can be progressive if it is not corrected at an early stage. Severely affected dogs can experience collapse of the larynx and require a permanent tracheostomy (a hole in the throat for breathing).

There appears to be a constellation of stomach and swallowing issues that correlates to the respiratory obstruction. In brachycephalic breeds, the esophagus (the tube that conducts swallowed food from the throat to the stomach) experiences reflux of stomach contents backwards. This reflux generates pain and inflammation. Compounding this problem is retention of food in the stomach for prolonged periods. Pooling of food in the stomach creates a sensation of nausea and increases the potential for vomiting and/or stomach acid reflux. The English bulldog seems particularly predisposed to GI complications in this way.  This sounds like an issue separate from the respiratory syndrome but in fact the reflux, regurgitation, and even herniation of part of the stomach into the chest cavity stems from the extreme inhalation efforts made against the upper airway obstruction that comes from the shape of the brachycephalic head. Medications are helpful for the intestinal issues, as is weight control, but often correction of the respiratory obstruction also corrects the intestinal problems.

With most of the nasal bones compacted, brachycephalic dogs tend to have trouble with the way their eyes seat in their heads. The eye sockets are shallow making the eyeballs especially prominent and vulnerable. Often a nasal fold of skin rubs on the eyeball and/or there are eyelashes rubbing on the eye.

Sometimes, the eyes are so prominent that the lids cannot close all the way over them. This will lead to irritation and drying of the center of the eye unless surgical correction is performed. If you cannot tell by watching your pet blink, watch as your pet sleeps to be sure the eyelids close all the way. If the eyelids cannot protect the eyes, blinding pigmentary changes will form where the eyes become irritated.

Many brachycephalic dogs have a fold of skin between the nose and eyes. This skin fold may need regular cleaning as it tends to collect skin oil and moisture but it can also be prominent enough to rub on the actual eyeball. Chronic irritation will show as a pigmented area on the eye surface, especially on the side nearest the nose. This is hard to see without a bright light but if it is noted, a search for the cause is warranted. Depending on the location of the pigmentation, surgery may be recommended.

The shortened face leads to rolling of the eyelids in such a way that the eyelashes or even haired skin can rub the eye. This is not only uncomfortable but will damage the eye. Some dogs have eyelids that droop or turn out in one area, but turn inward in another area (usually the corner of the eye). Surgical correction may be needed to protect the eye and restore comfort.

Brachycephalic breeds tend to get more than their share of tear production problems. In this situation, inadequate tears are produced so a thick, goopy, yellow eye discharge results. In response to the irritation eye pigments can becomes blind if treatment is not instituted. This condition is treatable with medication so it is important to recognize it before it progresses to a point where vision is lost and the goal is simply restoring comfort.

Recognize the prominence of the eyes on brachcephalics. The bony eye sockets are very shallow. This means that any blow to the back of the head, even a fairly minor one, can cause an eye to pop from its socket and require surgical replacement or even removing the eye. This can happen also with too much pulling against the leash if the pet is wearing a collar. You may wish to consider a harness for your pet. Traumatic proptosis is frequently blinding to the eye.

The normal dog has 42 teeth in the mouth. The brachycephalic dog also has 42 teeth but a lot less space to fit them in. This means that the teeth will be crowded and growing in at odd angles which, in turn, traps food debris and leads to periodontal disease at a far younger age than in non-brachycephalic. The earlier you begin using home care dental products, the longer you will be able to postpone full dentistry under general anesthesia.

As mentioned, skin fold infections are common amid the facial folds of the brachycephalic breeds. Be sure to examine these areas periodically for redness. Even if the fold does not rub on the eyeball, it will likely need regular cleaning and topical disinfection. The broad-headed nature of these breeds makes reproduction a tricky matter as Caesarean section is frequently needed. Difficult labor is common and, as surgical assistance is often necessary, it is important not to breed females with tracheal stenosis (see above). Brachycephalic breeding is not for the inexperienced.

Altogether, the brachycephalic breeds show plenty of personality and intelligence just as all dogs do but because of their specific needs, their owners need extra knowledge. If you have any questions about your brachycephalic dog, don’t hesitate to call your veterinarian.