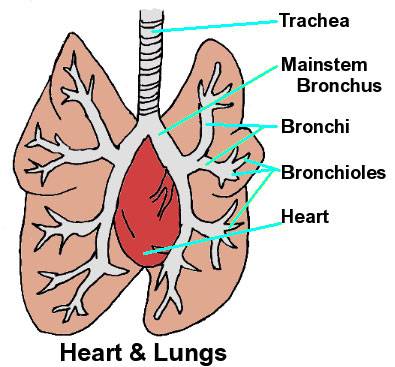 Most of us have heard of bronchitis and most of us have probably suffered from it at some point. The bronchi are the larger airways through which air is moved throughout the lungs. The trachea (windpipe) brings air from the throat down into the chest and branches into two mainstem bronchi, one for each lung. Each mainstem bronchus branches into smaller bronchi, which eventually become smaller structures called bronchioles that in turn branch and eventually terminate on the alveoli, small chambers where oxygen is absorbed into our bodies from the air we inhale.

Listen to a dog cough. Coughing is different from reverse sneezing or retching to vomit. The dog in this video is coughing.

Bronchi are basically tubes made of cartilage forming the larger “pipes” in our lungs.

When the bronchi are injured by irritants (cigarette smoke, air pollution, biochemical products of infection, etc.), they respond with a healing process that is inherently inflammatory. When the injury becomes ongoing, the inflammatory/healing process also becomes ongoing and the end result involves excessive mucus production in the airways. The mucus obstructs the smaller bronchi, which stimulates coughing, which in turn leads to irritation and then to inflammation and then to more mucus. A vicious cycle results.

Once the vicious cycle of mucus production to coughing to inflammation to mucus has become entrenched, it is unlikely to be cured and therapy is geared towards controlling the symptoms.

Bronchitis can be temporary, as in short-term infectious disease such as kennel cough, or it can be chronic, which basically means it has been going on for a long time. To fit the definition of chronic, the cough must occur daily for at least a couple of months. There are many causes of ongoing cough, and bronchitis is certainly not the only one. It is important to determine whether or not there is a reversible underlying cause. The character of the cough (wet, dry, honking, productive, etc.) is not particularly helpful in determining its cause.

There are many conditions that make dogs cough chronically including but not limited to:

Note that asthma is conspicuously missing from this list. Asthma involves recurring episodes of airway inflammation and narrowing rather than the continuous (non-episodic) airway inflammation. Asthma is not a natural clinical entity in dogs though it is certainly a well-described condition in cats. 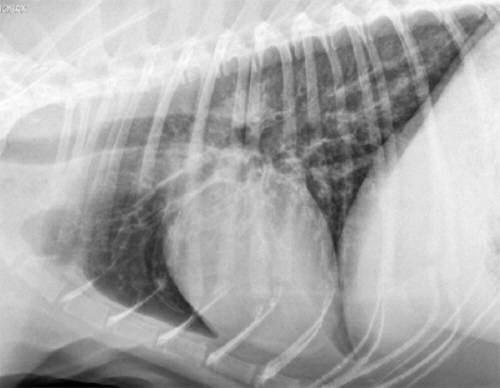 Radiographs (x-rays) of the lungs are crucial in ruling out conditions that have a specific treatment. In bronchitis, mucus in the airways tends to outline the shape of the airways in patterns that look like parallel lines (so-called tram lines) when looking at an airway’s side view or circles (so-called doughnuts) when looking at an airway end on. In bronchitis the airways may be dilated as well, especially if the case is advanced. Other conditions tend to have characteristic radiographic appearances of their own but there is definitely room for ambiguity.

Alternatively, a tracheal wash can be done to obtain samples using tubing and fluid washes. In this procedure, only samples are taken and there is no camera involved and no visual inspection of the airways. Sedation is generally needed.

Sedation and anesthesia are not without risk in patients with lung compromise so the benefit of obtaining diagnostic information must be weighed against patient risk. Often invasive procedures are skipped and trial courses of medication are used.

There are several aspects to the treatment of bronchitis. Often a weight loss program relieves so much chest restriction that medications become unnecessary. Physical therapy techniques can be used to clear secretions. Medications can be used to relieve inflammation, dilate airways, and reduce secretions but some trial and error is often needed to get the right combination.  Newer inhalant therapies can spare the patient many potential drug side effects.

Different individuals respond to different medications and in bronchitis there are several options to choose from and even combine.

Corticosteroids such as prednisone relieve inflammation and cut secretions like no other medication can. Typically a short course is used to control symptoms initially followed by a lower dose maintenance course. This helps dry up the mucus in the airways and stop the cough-irritation vicious cycle. The problem is that oral steroids have side effects potential with long-term use. Furthermore, because they are suppressive to the inflammatory process, it is important to have ruled out infectious causes of coughing that might be made worse with steroid use. 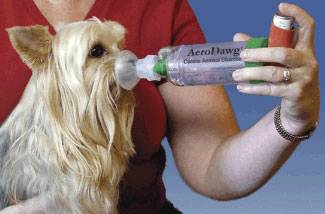 As an alternative to oral steroids, inhaled steroids can be used as is done with human asthmatics. A special facemask is used and a spacer connects the mask to the metered dose inhaler. A couple of puffs from the inhaler doses the dog with inhaled steroids and then it is possible to avoid the systemic side effects associated with oral steroids. Dogs typically need to use inhalers at least twice a day to control the symptoms of bronchitis. Airway dilators can also be given via inhalation in the same way as steroids.

The cough itself is involved in the vicious cycle of irritation described above. Suppression of the cough reflex through medication may be helpful in establishing patient comfort. On the other hand, we want our patient to be able to clear the mucus from the inflamed airways if there is an excess of mucus. Common medications used are hydrocodone and butorphanol. Over-the-counter human products are often ineffective and may be combined with harmful additional medications such as decongestants or pain relievers.

Never medicate your pet without checking with your veterinarian first about what product to use and how to dose it.

Although airways technically do not constrict in chronic bronchitis, it may be helpful to relax them, allowing air to pass through bronchi that had previously been so small as to be blocked by mucus. Common medications include: albuterol, terbutaline, and theophylline.  These are frequently used in combination with corticosteroids to reduce cough.

An over-the-counter supplement called N-acetylcysteine may be helpful. This supplement works by breaking down sulfur bonds in the airway mucus creating a more watery secretion. Thinner secretions may be easier to clear. The use of this supplement has not been formally studied for this use but it is an option that might be helpful.

Check with your veterinarian about what to use and how to use it.

Chronic bronchitis is not an infectious disease but all the inflammation and mucus in the lung certainly compromises the patient’s normal resistance to infection and ability to clear inhaled bacteria. Sometimes antibiotics are a helpful temporary addition to the therapies listed above.  More commonly, antibiotics are used early in the treatment course to rule out infectious causes of cough before the use of corticosteroids, which are immune suppressive.

It is important for the bronchitis patient to cough up inflammatory secretions as long as coughing does not become excessive and perpetuate the inflammation. It is not easy to draw the line as to when cough is helpful and when it is excessive; only experience will tell. In patients for whom coughing is encouraged, it may be useful to moisten secretions with a vaporizer or even a nebulizer; the difference in these pieces of equipment is the size of the water droplet they generate. Inhalation of water vapor a couple of times daily will help keep secretions moist.

Coupage is a form of respiratory physical therapy that allows for moistened secretions to be moved into more central airways so they can be coughed up. See a YouTube video of how to do coupage.

Pressure on the chest from body fat hampers the patient’s ability to take a deep breath. Many patients with chronic coughs do not require medication after excess weight has been lost simply because the chest can then expand properly.

It is especially important to minimize irritants circulating in the air. If possible, cigarette smoking should be limited to outdoor areas. If house painting, cleaning, or remodeling is planned, the pet should probably be boarded or stay elsewhere until any fumes have dissipated. It may be a good idea to get a good air filter for home use to minimize dusts, pollens, or molds in the air.

Chronic bronchitis represents an ongoing airway change that generally cannot be cured; however, symptoms are manageable for most patients. Discuss the options for therapy with your veterinarian, expect some trial and error to be necessary, and it is likely the outcome will be a system that keeps your pet comfortable.