Cytauxzoon felis infection is highly seasonal and takes place in spring and early summer when the tick population is active.

Cytauxzoon (pronounced “sight-oz-o-un”) organisms are blood parasites that were first recognized in Africa as a parasite of antelopes and other ruminants. Cytauxzoon organisms were not discovered in the U.S. until 1976 when Cytauxzoon felis was first described as a feline blood parasite affecting and killing cats from forested areas.  Initially there was concern that livestock were soon to be next as this was a ruminant infection as far as anyone knew but research showed only cats could be infected. It appears that in the U.S. the natural host of this infection is the bobcat, where most of the time the infection is minor, and it is only the domestic cat for whom infection is a disaster.

Cytauxzoon felis is a single-celled organism that infects both the blood and tissues of the cat. The blood cell stage of the parasite, called a piroplasm, is not particularly harmful; it is the tissue stage, called a schizont, that is the problem. The schizont infects immune cells that line blood vessels, which causes them to swell and block off the blood vessels in which they reside. Any tissue that has blood vessels (which is basically every tissue in the body) can be affected, but most symptoms seem to relate to the resulting red blood cell destruction and inflammation. Symptoms start small with listlessness and fever but quickly progress to jaundice, spleen enlargement, pain and death within one week with a 2 to 3 week incubation period from the time of initial infection.

How do Cats get this Infection? 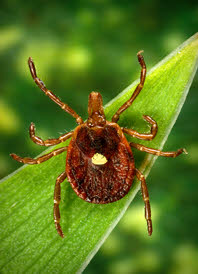 Cytauxzoon felis is spread by tick bites. The usually implicated ticks are the American Dog Tick (Dermacentor variabilis) and the Lone Star Tick (Amblyomma americium). Bobcats and infected domestic cats carry the Cytauxzoon piroplasms in their blood, ticks feed on the bobcats, and then drop off and molt to their next life stage. They are still carrying the Cytauxzoon piroplasm when they attach onto their next host, and if that next host is a domestic cat, a lethal infection results. The organisms are home to the immune cells lining the blood vessels as described above and, if the host lives long enough, the schizonts will eventually produce offspring (the piroplasms). Bobcats do not get sick during this process. It is the local bobcat population that infects the local tick population.

Cats cannot be infected without a tick bite.

How is Diagnosis Made? 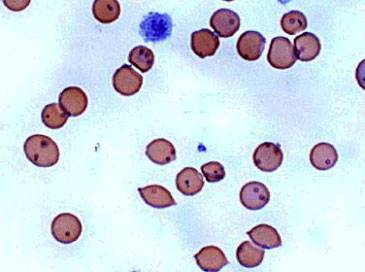 The cat typically has a fever, with or without jaundice, and is brought to the veterinarian for evaluation. In most cases the piroplasms are fairly obvious when the blood sample is evaluated. Because the tissue phase of the infection with the schizonts comes first and the blood infection with piroplasms comes after, it is possible that at the time the blood is tested no piroplasms are yet present. Because of the rapid progression of the infection, piroplasms will likely be seen in a few days if they are not at first so sometimes a second blood evaluation is needed.

Because piroplasms sometimes have variable sizes, they are sometimes mistaken for Mycoplasma hemofelis, a much more treatable infection.

Cytauxzoon organisms are larger and have a thick “dot” on their ring-shape.

If diagnosis is to be made post-mortem (after death), it is usually easy to find the schizonts in many body tissues.

Is There any Treatment at all?

In one study, a combination of atovaquone and azithromycin yielded a 60 percent survival rate in experimentally infected cats. Atovaquone, an anti-malarian drug, is not readily available but can be obtained through compounding pharmacies and another drug, imidocarb, can be used in the meantime. Cats must be hospitalized, supported with intravenous fluids, and have their blood anti-coagulated so as to prevent inappropriate clotting and vessel clogging with schizont-laden macrophages.

A milder strain of Cytauxzoon felis seems to have emerged in west Arkansas and east Oklahoma where a number of cats have survived without treatment (as do most bobcats). These cats continue to have piroplasms in their blood but seem to have no effect from this. It is yet unknown how this is able to happen. (Different strain of Cytauxzoon, effective medication, and genetics are all theories).

Since mortality is quite high with this infection and treatment is still highly investigational, prevention is paramount. The most effective prevention is to keep the cat indoors where there is no tick exposure. The next best prevention is to use a tick control product on the cat; note that there are not nearly as many tick products for cats as there are for dogs. Most canine tick products are toxic to cats and cannot be safely used so meticulous label reading is crucial. Just because a product works on fleas definitely does not mean it also works on ticks and the feline label is needed to ensure safety. New products are being approved and released every year, so ask your veterinarian.