Declawing and Alternatives for Cats

Declawing (also known as onychiectomy)  has probably become the most controversial of all the elective surgical procedures commonly performed by veterinarians. While it is normal for cats to scratch things (to mark territory as well as to condition their claws) this behavior can destroy the bond between an owner and pet cat. Cats, especially adolescent cats, have a tendency to play rough, scratching their owners or other pets sometimes violently in play. Claws serve to mark territory and assist in communicating territorial messages to other cats though this behavior can be undesirable when it is directed against furniture. The declaw surgery is an instant permanent solution to these problems; however, it is popularly held that a number of adverse conditions result from declawing, possibly including chronic pain for the cat. Pet owners need an understanding all of the alternative options involved as well as what the actual facts are regarding this procedure.

The American Veterinary Medical Association policy regarding declawing is: Declawing of domestic cats should be considered only after attempts have been made to prevent the cat from using its claws destructively or when its clawing is an above normal health risk for its owner(s).

Scratching is a natural behavior of cats, which makes it difficult to modify. The usual goal is to transfer the cat’s scratching instinct to a scratching post or other scratching toy; it is virtually impossible to control the desire to scratch completely. In general, this kind of training requires a great deal of time at home. Training tips include:

Many owners are not excited about putting mousetraps up against their living room furniture, upholstering in aluminum foil, or decorating sofas and chairs with balloons. It is easy to see why a surgical solution would be attractive. Fortunately, there are more options.

For some cats, simply keeping the nails short is adequate control but many people do not know how to trim their cat’s nails. In fact, the non-pigmented nail of a cat makes it easy to see where not to cut. This video on YouTube shows exactly what to do. 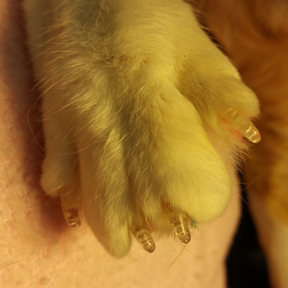 This is another popular method of controlling a scratching problem. Blunt acrylic nail caps are glued onto the cat’s claws. The idea is that the blunt nail will not be sharp enough to cause damage. The veterinary staff will place the first set but typically after that the owner has the option of placing the caps at home.

For additional resources on dealing with claws at home, visit www.catfriendly.com/scratching.

Despite our best efforts to deflect scratching or decrease claw sharpness, sometimes nothing works and an immediate, permanent solution is needed. It is important to consider that the declaw surgery alters the cat permanently and should not be done if alternative methods are effective. The cat will need some special care during the post-operative healing period: special litter, pain medication, and some activity restriction as he/she will have tender feet for a week or two after surgery. The declawed cat should be forever indoors or outdoors only with supervision as he/she will no longer have the ability to defend him/herself against dogs or other cats.

There is a great deal of controversy regarding this procedure and it has been legally restricted in many areas.

Three techniques are commonly used for permanent declaw surgery: the Resco or clipper blade method; the disarticulation method; and the Laser declaw.

This is probably the most common method used by veterinarians to declaw cats as it is associated with the fastest surgery time. It involves the use of a sterile nail trimmer to cut through the bone of the third digit of the toe. The cat loses the part of the bone from which the claw grows. The incision is either sewn closed with suture material or closed in surgical glue.

This procedure is a bit more difficult to master as it involves the delicate disconnection of all the tiny ligaments holding the third bone in place. The entire third bone is removed.

The Laser Declaw: Another Way to Disarticulate

Recently, the laser declaw has received a great deal of attention. In this surgery, a laser rather than a scalpel blade is used to disarticulate the third toe bone. Advantages of laser surgery include virtually no bleeding during surgery or afterwards, possibly less post-operative pain, and in many cases, no bandages.

The downside is the expense of the equipment. The cost of the laser equipment itself is $20,000 to $40,000. To justify such an expense, the laser must be able to generate substantial revenue for the hospital. This means that the cost of the laser declaw to the pet owner is likely to exceed the price of the conventional declaw by an additional $50 to $150 dollars.

To find a veterinarian who offers laser declaw, you can contact the laser companies directly.

Myths and Rumors: What People Hear about Declawing

Few veterinary surgeries encounter as much bias as the declaw, and a political movement emerged. Here are some of the issues that are discussed.

On the flip side is an improved relationship with the cat; reduced ability for the cat to harm the owner, child, or other pets; reduced shelter relinquishment of pet cats and fewer available homes for the current cat overpopulation.

The issue has become extremely polarizing and a great deal of misinformation has circulated. Research has been conducted to sort out truth from political propaganda. The AVMA has an excellent source where this research has been collated and the concerns are addressed.

MYTH #1:  After declawing, a cat is likely to become fearful or experience behavior changes, impairing an affectionate relationship with his owner.

Numerous scientific studies have been unable to document any behavior changes post-declaw. In fact, in one survey 70 percent of owners of declawed cats reported an improved relationship with their cat after the procedure.

Declawed cats are not as effective at climbing trees as cats with claws, but declawing does not prevent tree climbing.

Declawed cats are not as effective at catching prey as cats with claws but declawing does not prevent effective hunting.

MYTH #4:  A declawed cat has lost its ability to defend itself and should not be allowed outside.

This one is true. Without claws, a cat has indeed lost an important part of his defense system. I feel strongly that declawed cats should be housed indoors only.

MYTH #5:  Declawed cats are more likely to bite since they can no longer claw.

Declawed cats do not seem to realize they have no claws. They will continue to scratch ineffectively as if they did not know the difference. As for biting, there have been some studies that show an increased tendency to bite in declawed cats while other studies have not shown that. The trouble in interpreting this information is that one of the reasons cats are declawed is to control aggression. A cat that is aggressive (even in play) will bite and scratch more than a cat that is not aggressive. Without the ability to claw, the cat will still have its increased biting tendency compared to a cat that did not. Whether the aggressive cat bites more now that it has no claws is still hard to determine.

The declawed cat will have sore feet after surgery. The larger the cat, the more discomfort there is and reluctance to bear weight. Pain relievers are often prescribed. However, this recovery period should not last longer than a week or so. Healing should be complete by two weeks. Pain after this recovery period is not normal or expected in any way and if a declawed cat seems to be uncomfortable or lame, a recheck appointment is definitely needed.

MYTH #7:  A declawed cat will not use a litter box again.

It is important that litter not get impacted in the declaw incisions during the recovery period. Shredded paper is the usual recommendation during recovery and some cats simply will not use shredded paper. The recycled newspaper litters are an excellent alternative. The only litter problem one might expect would be lack of acceptance of a new litter during the recovery period. Declawed cats do not loose their litter box instinct.

Tendonectomy: A Surgical Alternative to Declawing

This surgical procedure has emerged as an alternative to the bone removing declaws. Here, a tendon is cut on the underside of each toe to prevent grasping motions. The claws remain but the cat cannot extend them.

The most important thing in making a claw management decision is making a decision that you are happy with. There are positives and negatives with each procedure.