Lupus – What is this Disease?

Lupus is an immune-mediated disease stemming from your own immune system reacting against your own DNA. This in itself sounds like a recipe for disaster since almost every cell in a body has DNA in it, but it is important to remember that under normal circumstances your DNA is sequestered in a cell nucleus where the antibodies of the immune system cannot reach it. The immune-system in lupus is not going around attacking every cell in the body to get to its DNA; instead, the immune system only sees DNA after cells have died and their assorted broken parts  are floating around as debris. The immune system reacts to this loose DNA and generates antibodies. These antibody:DNA complexes deposit in delicate membranes, such as the kidney filtration membranes, blood vessel linings, joint capsules, and other similar structures. Once caught in these membranes, other immunologic cells are attracted and further inflammatory damage results.

Systemic lupus (SLE) involves this kind of inflammatory disruption (called a Type III hypersensitivity reaction) and prognosis depends on which organ systems are affected and how severe the damage is. The disease is not curable but is manageable with immuno-suppressive drugs.

The name “lupus” stems from archaic times when the disease was thought to have been caused by the bite of a wolf. 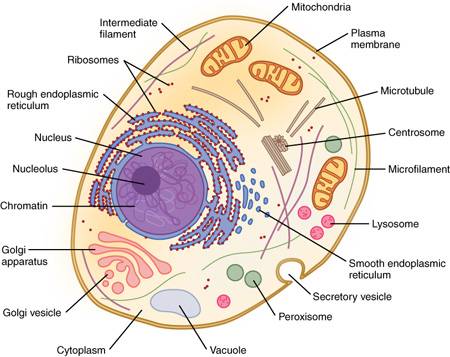 When people use the term lupus, they are referring to systemic lupus, or SLE as described above. Discoid lupus is a form of lupus that is confined to the skin and is substantially more benign because of this confinement. Discoid lupus, or DLE, is almost exclusively a canine disease and is almost always limited to the leather of the nose, called the nasal planum.

DLE does not progress to SLE.

The immune-system in lupus is not going around attacking every cell in the body to get to its DNA; instead, the immune system only sees DNA after cells have died and their assorted broken parts are floating around as debris.

Lesions of DLE are almost always limited to the nose though they can extend up the bridge of the nose and sometimes affect the ears or inside the mouth. Early signs of the condition start with loss of nose pigment. A black nose will become bluish-grey or even pink. Scaling and cracking of the skin results and eventually the nose will ulcerate. Exposure to sunshine makes the condition worse and there seems to be a genetic predisposition among the collie breeds (hence the term collie nose). 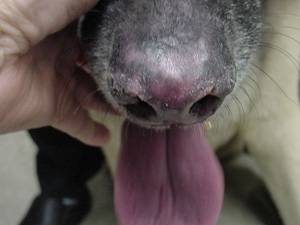 Diagnosis is by biopsy, which means a small piece of nose tissue must be harvested and sent to the laboratory for analysis. Most dogs will not hold still for this kind of a procedure on their nose so sedation is generally needed to get proper samples. Expect stitches afterwards; some mild bleeding is possible.

Discoid lupus is a condition with many treatment options depending on the severity of symptoms.

See the pet sun protector approved by the Food and Drug Administration and endorsed by the American Animal Hospital Association and the ASPCA.

The immune-suppressive effects of steroids are helpful in DLE but the systemic side effects are undesirable. Side effects are minimized by using topical steroids, typically starting twice a day and eventually dropping to an as needed basis for maintenance after the nose is healed.

Tetracycline is an antibiotic with immunomodulating properties separate from its antibiotic properties. Niacinamide (also called nicotinamide) is a B vitamin supplement related to niacin (vitamin B3). The combination of these two medications has been found effective in 70% of dogs with DLE though it can take up to two months to see an effect. Treatment is given three times daily, which is relatively inconvenient for most people so alternatives have been sought. Doxycycline can be used twice a day and is frequently substituted for tetracycline.

Oral steroids are often used to get the condition under control relatively quickly (within a month) and can be used after that as the sole therapy after the lowest effective maintenance dose is determined. Side effects include panting, excessive thirst and urination, and increased appetite, which are frequently not desirable so often steroids are used in conjunction with one of the other therapies that has a longer time to maximum effect with the idea of dropping back the steroids when the second therapy can take over.

Cylosporine is an immunomodulator that has found extensive use in veterinary medicine for a number of immune-mediated conditions including allergy. It can be used to control DLE but has some potential for side effects (mostly upset stomach) that might not be worthwhile for milder cases.

This is a topical immunomodulator made for human use. It is very effective for use in DLE and does not cause problems if licked. Only small amounts of ointment are needed and the tube should last a long time which is good news since it is not inexpensive. The person applying the medication should wear gloves to avoid unneeded exposure.

If your dog is diagnosed with discoid lupus, discuss therapy options with your veterinarian. If your dog has a crusty or ulcerated nose, expect a biopsy to be needed to sort out the diagnosis properly before treatment can be prescribed.