The goal in long-term management of diabetes mellitus is the alleviation of unpleasant clinical signs (constant thirst, weight loss etc.) and prevention of dangerous secondary conditions (infections, ketoacidosis etc.). To accomplish this, blood sugar levels should be regulated between 250 mg/dl and 80 mg/dl. This is not as good as the body’s natural regulation but it is a fair and achievable goal in most cases.

Some patients just seem completely unaffected by even high doses of insulin and it is important to have a step-by-step plan to rule out causes of insulin resistance so that regulation can be achieved.

Insulin resistance is defined as:

Persistent high blood sugar levels throughout the day when three units of insulin per four pounds of patient body weight are used.

A unit or more of insulin per pound of patient body weight (or more) is needed to achieve regulation.

Typically glucose curves show levels that are consistently too high with virtually no drop in sugar level when insulin activity is peaking. So what is going on here? The possibilities may seem surprising.

Step One: Rule out Owner-Related Factors

Owner error is actually the most common cause of what is thought to be insulin resistence.

This may seem basic but it is important not to skip the basics. Confirm that the amount of insulin being drawn into the insulin syringe is correct, that the injection technique is correct and that the patient is actually receiving the injection. Rule out any snacking or changes in the patient’s feeding schedule. Be sure the bottle of insulin is not expired and that it has been properly stored. Ideally, the veterinary staff will observe insulin administration and will check the bottle while the pet is being checked in the hospital. 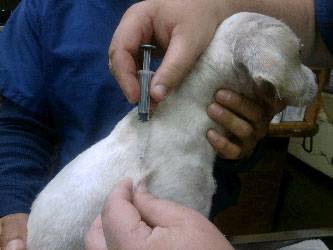 Step Two: Determine for sure that the Patient is Insulin Resistant

A glucose curve is needed to distinguish the following three phenomena.

In the case of Somogyi overswing, the insulin dose is too high and drives the blood sugar low for part of the day. When the blood sugar is low, other hormones such as cortisone or adrenalin are released to raise blood sugar. These hormones can have a prolonged effect (many hours), thus creating hyperglycemia (high blood sugar). If the patient’s high blood sugar has been caused by a Somogyi overswing, a lower dose should be used and a new curve performed in a week or two.  One might think a flat glucose curve (i.e. one not showing hypoglycemia followed by hyperglycemia) would rule out Somogyi overswing but, in fact, a Somogyi hyperglycemia can persist for days and create a flat curve. Often a good approach is to cut the insulin dose back and see what the curve looks like.

In this case, the insulin simply is not lasting long enough to create sustained normal blood sugar levels. If the curve shows that the insulin effect is wearing off too soon, twice a day administration of the insulin may solve this problem or a longer-acting insulin may be needed. Longer acting insulins tend to have poorer absorption into the body from an injection site. This may also necessitate change to a different insulin type. Often it is necessary to change to a human insulin from a canine insulin.

Here no significant drop in blood sugar level (levels stay greater than 300 mg/dl) is seen in response to the insulin dose used. Usually there is a history of prior increases in insulin dose, all met with minimal response.

Hormone fluctuations will easily account for insulin resistance as progesterone is one of many hormones that raise blood sugar levels (by stimulating growth hormone secretion). Canine unspayed female diabetics need to be spayed if regulation is to be achieved. (Feline patients do not have a similar relationship with naturally occurring progesterones and do not require spaying; however, progesterone-type medications can produce diabetes in cats. Diabetic patients of either species should not take progesterone-related medications.)

Diabetic animals are at risk for developing bladder infections because they have so much sugar in their urine. Stress of any kind will contribute to high blood sugar and infection would lead to stress. A urine culture should be done to rule out bladder infection, plus the teeth and skin should be inspected for infection in these areas. If infection per se is not found, the patient should be screened for other chronic illnesses that might constitute a stress. A basic blood panel would be a logical starting point.

If infection or other stress is allowed to go unchecked, ketoacidosis, an especially life-threatening complication of diabetes mellitus, can develop.

To avoid infection issues, it is a good idea to plan for diabetic patients to have their teeth cleaned annually and to have the urine periodically cultured whether there are symptoms of a problem or not. 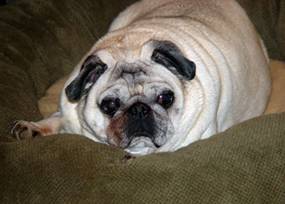 Insulin response is typically blunted in obese patients. If obesity is an issue, it should be addressed. A formal weight loss program using measured amounts of a prescription diet and regular weigh-ins is necessary for success. See general information about weight loss for pets.

If these steps do not reveal a relatively simple explanation for the poor insulin response, then it is time to seek more complicated causes. This generally means an additional hormone imbalance.

This condition is relatively common in dogs but less so in cats. This condition involves an excess in cortisone-type hormones, either from over-production within the body or over-treatment with medication. Cortisone – more accurately referred to as cortisol – is secreted naturally in response to a fight or flight situation and prepares the body for exercise by mobilizing sugar stores. If sugar is mobilized into the blood stream in the absence of a fight or flight situation, diabetes mellitus can result. If the excess cortisone situation is resolved, it is possible that the diabetes will also resolve.

High levels of circulating triglycerides (fats) interfere with binding insulin to the cells it needs to act upon. While most dogs with excess circulating lipids are not diabetic, when a diabetic patient is insulin resistant it may be helpful to attempt to reduce the circulating fats. Excess lipids in the blood usually occur because of some other hormone imbalance (Cushing’s disease, hypothyroidism in dogs etc.) but they can simply happen spontaneously in the miniature schnauzer.

Circulating fats are reduced by treating the hormone imbalance that caused them if there is one. If there is no underlying disease, circulating lipids can be reduced with diet and omega 3 fatty acid supplementation.

Acromegaly results from an over-secretion of the pituitary hormone known as growth hormone. This hormone normally is responsible for one’s growth from infancy to adulthood. When adulthood is achieved, its secretion dramatically slows, bone growth plates close, and growth essentially stops. If for some reason, this hormone begins secreting again, growth resumes but not generally in normal proportions as the limb bones have closed their growth areas.

One of the effects of growth hormone is causing the body tissues to become resistant to insulin by interfering with tissue insulin receptors. Animals with acromegaly are frequently diabetic.

The prognosis and treatment for acromegaly is different between dogs and cats. Dogs generally develop acromegaly due to excess progesterone secretion, as would occur from an ovarian cyst. Canine patients are thus usually older, unspayed females and spaying may be curative depending on the remaining ability of the pancreas to secrete insulin.

When a patient is treated with insulin from another species, the immune system recognizes the introduction of the foreign protein and generates antibodies. It was because of this phenomenon that most commercial insulin available is genetically engineered human insulin so that the world’s human diabetics no longer need to worry about making insulin antibodies.

But where does this leave dogs and cats? It leaves them making antibodies against human insulin, that’s where. There is no feline insulin product available; the closest thing is beef insulin. Dogs are luckier as their insulin is identical to pig insulin and porcine insulin is available as Vetsulin® (Caninsulin® in Canada). If a human insulin is used, some degree of antibody production is a forgone conclusion.

You would think this would pose a big problem but in fact insulin antibodies are not always bad. Most of the time the antibodies simply interfere with removal of the insulin, leading to a longer-acting insulin than would be achieved with the same type of insulin made from the native species. For example, Humulin N® (human insulin) will last longer in the dog than Canine Insulin N (if there were such a product). This may be desirable depending on the patient; changing the species of origin of the insulin is one way to get the insulin to last a bit longer.

To become insulin resistant from antibodies, a body must lose 70% or more of the insulin injection to antibody binding. This is very unusual but possible and should not be forgotten as a possible cause of insulin resistance. Blood tests to measure insulin antibodies are available in some areas. Insulin can be switched to a species of origin more closely related to the species desired.

If a Cause Cannot be Found

If a cause cannot be found or if treatment for that cause is not practical or possible, the good news is that multiple high doses of insulin can generally overcome the resistance. Sometimes combinations of short and long-acting insulins are used together to achieve reasonable regulation.