We have covered the worm, now let’s cover the dog once after becoming infected. As we have said, the migration of the young worm once it enters the dog’s body is a long one:  a journey of five to seven months. In that time, the worm is growing, maturing, and preparing to mate. While all this is happening, nothing is happening to the dog and no one knows an invasion has taken place.

Worms in the Pulmonary Arteries

At the end of this long migration, the worm has reached its destination: a pulmonary artery. The worm is large and takes up a lot of space in the artery. The dog’s immune system recognizes foreign proteins present and launches an attack but the immune system is designed to work against smaller invaders such as bacteria or viruses. The heartworm is too big to be killed effectively this way and the result is inflammation and thickening in the arteries.

Blood flow becomes turbulent and the tendency to form abnormal clots is increased. Adding to this unpleasant mix is a bacterium called Wolbachia pipientis, which normally lives inside the heartworm but is released in large numbers every time the heartworm molts to a new developmental stage, gives birth to its young, or dies. These bacteria contribute heavily to the resultant inflammation occurring in the pulmonary arteries and lung tissue itself. Blood vessels get stiff and cannot operate normally, creating a high-resistance area that the heart must pump through.

The inflammation calls in numerous immune cells, which in turn generate even more inflammation as they attempt to destroy a parasite as relatively large as a heartworm. The lung itself becomes inflamed and in time becomes scarred, creating an even larger high-resistance area for the heart to pump through.

If there are many worms, the problem is multiplied. Some arteries may actually be obstructed by the number of worms. This leaves areas of lung unable to receive circulation, which means these areas cannot participate in oxygen exchange.

Dying Worms
As if that wasn’t bad enough, the real damage comes from worms that have died in place. The dead body of the heartworm breaks apart and is carried through the vasculature of the lung until it lodges somewhere and obstructs blood flow. The arteries that are supposed to form delicate branches, branching tinier and tinier, are now blunted and closed off, similar to a tree branch broken off close to the tree trunk. As above, this leaves more areas of lung blocked off and unable to receive blood and participate in oxygen exchange.

Scarring
All the inflammation generated by the worms as well as the inflammation generated by the areas of lung that aren’t receiving proper circulation ultimately translates into scarring in the lung vasculature. Scarring and fibrosis makes it difficult for the heart to pump blood through the lung effectively. There is a point where the heart is not strong enough to pump blood through all the narrowed, stiff damaged capillary beds. Right sided heart failure ensues.

How Many Worms are too Many?
In naturally infected dogs, the number or worms does not correlate to severity of disease, even in dogs of the same size. The factors that come into play to create severity of disease are: the dog’s activity level (the more active the dog, the fewer worms are needed to create disease); the size of the dog; and the number of worms. The infected dog that sits around at home may appear relatively normal but once some exercise or even anxiety puts more demand on his heart, symptoms erupt.

Obviously, not all of these things necessarily occur in the same dog, nor is there necessarily a progression. An infected dog may have no symptoms at all or may develop any of the signs on the list at any time.

When a dog goes without treatment for heartworm infection, its immune system becomes chronically stimulated. Antibodies, which are not only important tools of the immune system but are inflammatory proteins, are produced in high amounts all the time. These antibodies can cause a lot of trouble by dropping into the delicate membranes of the eye, blood vessels, joints, and kidney. Antibodies stuck in these areas, call in inflammatory cells and damage these delicate membranes, thus setting up tremendous tissue damage and pain. In particular, heartworm infection is a cause of a type of kidney inflammation called glomerular disease. Fortunately, this inflammation and its consequences can frequently be resolved by treating heartworm infection.

Caval syndrome is an especially disastrous form of heartworm disease. Here, there are so many worms (around 100) that the entire right side of the heart is filled with worms and they are backing out into the large veins that feed the right side of the heart. Usually there have been no signs of heart disease prior to the collapse, shock, and red blood cell destruction associated with this syndrome. Death usually occurs within one to two days and the only effective treatment is to open the dog’s jugular vein and physically remove the worms with a clamp. If enough worms can be removed to re-establish blood flow, the dog may survive. 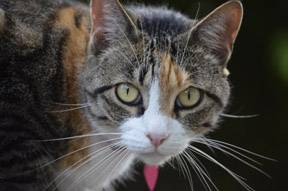 Heartworm disease is cats is quite a bit different from dogs. Cats are so small that only one adult worm could be enough to cause heart failure, plus in cats there is much more inflammation involved with the immature worms. See details on feline heartworm disease.