When the Diagnosis is Hemangiopericytoma

What is a Pericyte?

Consider that everyone began life as a single cell. This cell divided over and over and became many cells. As time continued, we became groups of different types of cells. Eventually we became embryos, fetuses, and finally infants with complete organ systems and different tissues all derived from one original cell. During the course of this amazing development, some cells do not specialize fully into specific tissues. They stay “undifferentiated” and can in the future specialize into whatever type of cell our body might require at that time. We have cells throughout our bodies that simply stayed put at different stages of embryonic development. Pericytes are such cells. They have arrested their development from embryonic times and are located all over the body supporting blood vessels and waiting for a signal to develop. If the body has need, pericytes can develop into new muscle tissue or new blood vessel tissue. A pathology instructor once described the pericyte as perhaps not the Adam and Eve of our bodies but more like Abraham: not the first or even second generation by any means, but ancient.

A hemangiopericytoma is a tumor arising from pericytes associated with blood vessels. Instead of forming a useful tissue, these pericytes form tumors because improper cell division left them with chromosome damage. 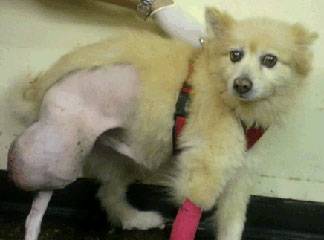 The hemangiopericytoma does not spread through the body in the way you normally think of cancer. It does, however, tend to recur at its original site. When it recurs, it tends to grow back more deeply rooted and more difficult to remove than it was originally.

If left alone it will continue to grow inexorably, usually over years, until it invades a part of the body that does not have extra space to allow a tumor; usually the chest cavity is the closest such area.

What are the Treatment Options?

Treatment centers around local tumor control and this usually means surgery. A small hemangiopericytoma might be removable. A larger one could could be partially removed. The problem is that the hemangiopericytoma is a blood vessel tumor. Bleeding can be spectacular with the larger growths and surgery becomes risky. The first step involves some sort of biopsy, either an attempt at removing the whole tumor or simply a mission to take a small piece and identify the tumor depending on the tumor size and amount of bleeding encountered. Once the growth is confirmed as hemangiopericytoma and the bulk of the tumor has been removed, the focus becomes slowing its growth and preventing recurrence. Here are the options after the initial surgery.

What about Inoperable Tumors?

Some tumors are just too big, are located in a body area not amenable to surgery, or the patient has concurrent problems that make surgery problematic. If surgery is not practical, there are still treatment options to consider:

Not all veterinarians are comfortable treating a hemangiopericytoma. Discuss with your veterinarian whether referral to a specialist would be best for you and your pet.