Hemangiosarcoma is Blood or Skin Cancer in Dogs and Cats

Hemangiosarcoma is a malignant tumor of blood vessel cells. With the exception of the skin form, which can often be eliminated by surgery, a diagnosis of hemangiosarcoma is bad news. This tumor is associated with serious internal bleeding and rapid internal spread. Fortunately, it is not completely without therapy options and, as long as expectations are realistic, significant disease-free time is possible.

Any breed of dog can be affected but a predisposition has been identified in the German shepherd dog, the golden retriever, and the Labrador retriever. Median age at the time of diagnosis is 10 years.

Hemangiosarcoma can theoretically arise from any tissue where there are blood vessels (which amounts to anywhere in the body) but there are three classical locations that account for most presentations:

The skin forms of hemangiosarcoma are the best types to have as they are the most easily removed surgically and thus have the greatest potential for complete cure.

The skin forms of hemangiosarcoma are classified as either dermal and subcutaneous (also called hypodermal). The true skin form looks like a rosy red or even black growth on the skin. This form is frequently associated with sun exposure and thus tends to form on non-haired or sparsely haired skin, such as on the abdomen, or on areas with white fur. Dogs with short white-haired fur (such as Dalmatians and pit bull terriers) are predisposed to developing this tumor. Approximately one-third of cases will spread internally in a malignant way if given enough time, so it is important to remove such growths promptly.

The biggest problem with the dermal hemangiosarcoma is that it frequently arises in multiple spots within a broader expense of skin. Isolated growths can be easily removed but when a large area of skin is involved, surgical removal becomes trickier and often multiple surgeries are needed to remove multiple small tumors.

The dermal hemangiosarcoma has a fair prognosis as long as it is removed before it can invade to the subcutaneous tissues.

The biopsy report will indicate whether or not all of the growth was removed. If the tissue completely surrounding the growth is normal, this indicates that the growth has been removed completely and that it should not grow back.

Because the subcutaneous form of hemangiosarcoma wants to spread, staging is a good idea to determine the extent of the disease. Knowing how far the tumor has spread will establish appropriate treatment options and provide information on life-expectancy.

After staging, consultation with an oncology specialist is likely to provide the most up-to-date recommendations.

Hemangiosarcoma of the Spleen

The spleen is a fairly deep-seated abdominal organ that tends to go unnoticed unless it grows unusually large. Splenic growths have the unfortunate tendency to break open and bleed profusely regardless of whether they are benign or malignant. While a splenectomy (removal of the spleen) certainly ends the prospect of this type of life-threatening sudden bleed, splenic hemangiosarcoma is still a rapidly spreading malignancy.

When a splenic mass is detected, it may not be possible to tell before a splenectomy whether or not the mass is malignant (though certainly basic testing is done in an attempt to determine this). Chest radiographs are generally performed pre-operatively to check for evidence of cancer spread as well as for evidence of a concurrent heart-based tumor (heart-based hemangiosarcoma and splenic hemangiosarcoma occur together in 8 percent of splenic hemangiosarcoma patients). If possible, abdominal ultrasound can be done to look for tumor spread to other organs prior to surgical exploration. If tumor spread is evident, it may not be worth continuing on to surgery and certainly if tumor spread is not evident, that does not mean that the tumor is benign. The spleen will need to be removed and sent to the lab for analysis in order to determine if it is benign or malignant.

Obviously, this is a highly malignant tumor with limited treatment options. Often a pet owner has never heard of this tumor until a beloved pet is suddenly in the middle of an internal bleeding crisis and decisions must be made quickly. Clearly, the best outcome results when the tumor turns out to be benign but, as mentioned, it may take a risky and expensive surgery to determine this.

Yunnan Baiyo: A Chinese Herbal
It is worth mentioning this product as it may be the only option for a dog that is not going to have surgery. A splenic tumor will periodically bleed and clot again and again until the point comes when the bleed is simply too big and the patient succumbs to the blood loss. This herb has been found to improve clotting tendencies and may give the patient an edge against the tumor. Ask your veterinarian for instructions on how to use this product. It comes as either a powder or in capsules.

A bleeding episode will manifest as weakness, chill and pale gums. A snug bandage wrap around the belly may stop the bleeding in the home setting. Obviously, this kind of first aid approach is not a replacement for emergency medical treatment but if you are doing home hospice care, it may be appropriate.

Like the splenic hemangiosarcoma, the heart-based hemangiosarcoma exerts its life-threatening effects by bleeding. Tumors are generally located around the right side of the heart base.

The heart is enclosed in a sac called the pericardium. When the hemangiosarcoma bleeds, the blood fills up the pericardium until it is so full that the heart inside is under so much pressure that it has no room to fill with the blood it needs to pump.

In chest radiographs, the heart looks globoid (spherical). In fact, the heart is of normal shape but all that can be seen is the large, round heart shadow of the pericardium filled to capacity with blood. Ultrasound is needed to truly see the effusion.

This condition, if allowed to progress, results in an emergency circulating collapse called a pericardial tamponade and can only be relieved by tapping the pericardium with a needle and withdrawing the excess fluid.

Chemotherapy is necessary to create a substantial improvement in survival time. The most current protocol involves injectable Adriamycin (doxorubicin) every three weeks and oral cyclophosphamide at home for three days out of the week.

On the Horizon
Immunotherapy is an active area of research with the idea being to find a vaccine that will induce the patient’s own immune system to seek and attack the tumor. This area appears promising but is still in an experimental stage. Antiangiogenic therapy involves reducing the tumor’s ability to generate blood vessels to feed itself. This area is also investigational at this time. It may be possible for your pet to participate in a funded study. 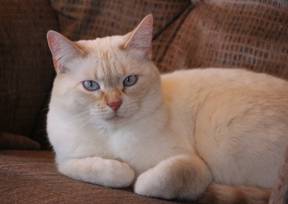 Recent studies indicate that the dermal and subcutaneous forms are the most common. These forms tend to develop on the head, which suggests that sun exposure is a risk factor. For the dermal and subcutaneous forms of feline hemangiosarcoma, surgical removal is the chief treatment and is the most likely to be curative for dermal forms. Subcutaneous hemangiosarcomas are more difficult to remove completely and have a 60 percent recurrence rate after surgery. The visceral form is the most aggressive form with approximately 30 percent of cats being far gone enough to warrant euthanasia at the time of initial diagnosis (or having already died with the diagnosis being made on a post-mortem exam).

In dogs, adding chemotherapy to surgery has been helpful in extending the disease-free interval. Certainly protocols are available for cats, but so few cats have been treated that statistics comparing protocols or even comparing surgery plus chemotherapy treatment vs. surgery alone are not available.