Hydrocephalus Water on the Brain in Dogs and Cats

The brain and spinal cord are bathed in cerebrospinal fluid, the fluid that is tapped and analyzed when a spinal tap is performed. This fluid is created in chambers in the brain called ventricles. It circulates around the brain and spinal cord without ever mixing with the bloodstream and is ultimately reabsorbed back into the body. In hydrocephalus, there is too much fluid either because of a drainage problem or an over-production problem. When the problem is congenital (meaning the animal is born with the condition or born so as to promptly develop it), the skull is still soft enough at birth and in infancy to expand somewhat with the extra fluid inside the brain. This expansion leads to a dome-shaped head and frequently an open fontanelle (soft spot where the skull bones have not fully closed). Unfortunately, when the skull bones eventually harden, the shape of the skull is set and there is no more room to accommodate the increasing fluid volume inside. Pressure on the brain results and therein lies the problem.

Because the skull cannot expand with increased contents, the result is compression of the brain by the extra fluid. 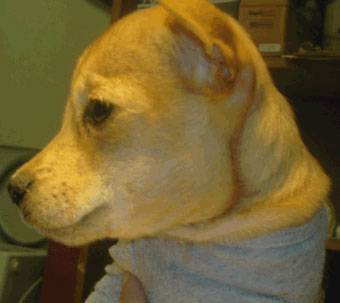 How do Animals get Hydrocephalus?

Most animals with hydrocephalus are puppies with congenital anomalies that lead to hydrocephalus; they are not born with it but they are born with the anatomical problems that quickly lead to hydrocephalus. The most commonly affected breeds are those with a natural tendency towards the domed-head: Chihuahua, Pomeranian, Yorkshire terrier, English bulldog, Lhasa apso, shih tzu, Pug, Pekingese, Boston terrier, Maltese, toy poodle, and Cairn terrier.

The same configuration that produces the domed head in infancy fuses the area of the brain called the rostral colliculi. The fusion is where the colliculi narrows the ducts that carry the cerebrospinal fluid, impeding normal flow. Fluid leaks into the white matter of the brain causing edema (swelling) or, worse, the fluid compresses the developing brain. In puppies, this is generally a genetic problem related to the breed. In kittens, however, the most common cause is exposure during the mother’s pregnancy either to the drug griseofulvin (used to treat the ringworm fungus) or to the feline distemper virus.

While we usually think of hydrocephalus as a young baby’s problem, hydrocephalus can also be acquired in adulthood when inflammatory brain disease causes swelling and obstructs the flow channels of the cerebrospinal fluid.

When to Suspect Hydrocephalus

When a puppy or kitten has hydrocephalus, symptoms usually become evident by 8 to 12 weeks of age. The skull looks especially round and there is an open fontanelle (skull soft spot) on the top of the head. The pet may show what is called the setting sun sign, which means the eyes are directed downwards and possibly outwards. The animal may suffer from seizures (less than 20 percent of affected puppies), blindness, may press his head into corners, may walk in circles, may have mental dullness or have extreme difficulty in house-training (over 75 percent).

That said, many dome-headed babies have open fontanelles and never develop any neurologic deficits and never require treatment. The key to diagnosis is about the behavior and mental development of the baby. If there is a domed head and open fontanelle AND a setting sun sign, mental dullness, learning disability, or overt neurologic symptoms, then further action is necessary.

Radiographs of the skull will show thin skull bones but to truly confirm the condition, imaging of the brain is needed. This can be done by using ultrasound through the open fontanelle or CT or MRI. The size of the brain ventricles is examined and the white matter is checked for swelling (edema). If it is ultimately decided that the baby truly has a neurologic problem and all the signs of excessive cerebrospinal fluid are evident, then treatment can be pursued.

Temporary relief of the increased fluid pressure can be achieved with medication. Diuretics can be used to decrease fluid production in the brain but you have to be careful about causing the patient to become dehydrated. Electrolyte imbalances are also possible. Corticosteroids such as prednisone can relieve swelling in the brain and are also helpful. Oddly, the antacid omeprazole has been shown to decrease cerebrospinal fluid production by 26 percent though we do not know how this occurs. Some studies have not shown a benefit, so it is unclear how well this works or if specific circumstances are necessary.

For a more permanent resolution, a shunt must be surgically placed. A shunt is a small tube that is surgically implanted in one of the brain’s ventricles. It siphons excess fluid away and drains it to another area of the body where it is harmless, such as the abdominal cavity. As the animal grows, shunt revisions are required to re-fit the shunt. If there is evidence of infection in the central nervous system, a shunt cannot be placed. This is because the placement of a foreign body (i.e., the shunt itself) will provide a shelter for the infection and the infection will never clear up. The infection must be resolved before the shunt is placed.

Complications of the shunt include: infection (4-10 percent of all shunts placed in humans get infected), over-drainage, under-drainage, and obstructed tubing. The shunt can drain to either the abdominal cavity or the heart. Fewer complications, as well as easier placement, are associated with shunts that go to the abdomen. Overall, success rate for the ventriculoperitoneal shunt is felt to be approximately 80 percent.

Shunt placement is a procedure that not all veterinarians are comfortable performing. Discuss with your veterinarian whether referral to a specialist such as a surgeon or neurologist would be best for you and your pet.