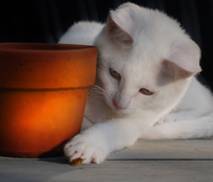 The word hyperesthesia basically means an increase in sensitivity. If you have a cat with this syndrome you will probably be well aware of what is meant by this. These cats act as though they have pain from simply being petted, especially along their lower back. Their skin seems to twitch as if they are irritated just by the air currents passing over them. Some cats will attack their tails or even go running through the house screaming. Cats with milder disease may simply lick or bite their paws in response to petting. Often, itchy skin conditions, such as flea bite allergy, make the syndrome more prominent. Some cats actually go into seizures when petted in certain ways.

Hyperesthesia syndrome is felt to be a type of compulsive disorder, usually initiated when the cat is in conflict. The cat wants to perform one behavior but is prevented from doing so and ultimately in frustration performs another behavior. After a while, this second behavior, which frequently is grooming, is performed compulsively.

The usual patient is relatively young, age 1 to 5 years and is most commonly an Oriental breed such as a Burmese, Siamese, Abyssinian, or Persian,  though any breed of cat can be involved.

The goal of treatment is ultimately to provide the cat with good life quality, free from discomfort. The cat should not have seizures, self-mutilate, become incontinent or act aggressively during an episode. Medication may not be needed if the cat merely undergoes compulsive grooming in response to certain types of petting or if episodes can be avoided by refraining from touching certain body areas of the cat. If the cat is triggering episodes on its own through normal grooming, intervention is probably necessary.

A good first step is to manage itching. Itch stimulation leads to grooming, which can lead to a full-blown episode of compulsive self-mutilation or even seizing so it is important to make sure obvious sources of itch are controlled. This means that there should be no fleas in the cat’s environment and medication (such as corticosteroids) should be used to relieve any skin inflammation. Omega 3 fatty acid supplements can be added to the diet to decrease the skin’s sensitivity to itch. Simply controlling itch may be all that is needed to prevent compulsive episodes.

If the cat is still having excessive episodes despite reduction in itch stimulation, a more neurologic approach may be needed.  If seizures are part of the problem and controlling the itch does not control them, then medication for seizures should be used (phenobarbital is the most common feline choice but other medications are available as well). Gabapentin may be added in as it not only has anti-seizure effects but it also is useful for neuropathic pain, which is pain deriving from over-sensitive nerves.

If compulsive grooming seems to be more a problem than seizures, then psychoactive medications such as fluoxetine and clomipramine may be in order along with the use of toys or other stimulating objects to distract the cat out of an episode.  Because the episodes seem to have their roots in behavior conflict, the cat’s environment needs to be stabilized with scheduled feedings, plenty of toys, and minimized competition for refuge and the litter box with other cats. Inner conflict can be avoided if the cat feels free to engage in normal activities without being bullied by other pets or limited by available resources.

Since the tail is often the target of self-mutilation, it is important to rule out sources of pain such as old injuries (especially old tail fractures or broken hip bones) that might cause sudden nerve or muscle spasms. For these situations, techniques of pain management (physical therapy, chiropractic adjustment, acupuncture, medication or a combination thereof) may be helpful.

There is tremendous variability in its response to treatment. Some cats respond to itch relief alone while others require seizure control plus itch relief, and still more require more extensive psychoactive medications. The cat may not end up being completely normal but it is a reasonable goal to expect that ultimately there will be no self-mutilation. Inappropriate pain perception should be reduced to the extent that the cat has a good life quality over all.