Immunotherapy for Allergies in Dogs and Cats 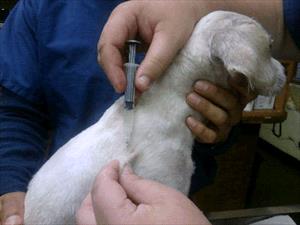 Most people know someone who gets periodic allergy shots for airborne allergies. Allergen specific immunotherapy (ASIT), commonly referred to as allergy shots, are the most effective way to address airborne allergies, sometimes even resulting in a permanent cure. This sounds wonderful but there is expense involved plus it commonly takes a year to realize results and will not help the pet (or person) who is experiencing symptoms right now. ASIT involves the use of an individually-made serum, created using small amounts of allergens (proteins against which the person or pet reacts). The patient periodically receives injections of gradually increasing amounts of allergens until a maintenance level is reached. This method of allergy control uses the patient’s own immune system rather than drugs to address the symptoms of allergy. It may seem odd that injecting someone with the very substances to which they are allergic would be helpful but it is. All other therapies for airborne allergies basically aim to suppress the symptoms; allergen-specific immunotherapy is the only therapy that actually works against the immunological disease. The earlier in the allergic patient’s life ASIT is started, the better the results. Regular rechecks are needed through the course of ASIT.

What to Expect from Immunotherapy

It can easily take a year to determine if the pet is responding.

Many people go marching off to a veterinary dermatologist with their itchy pet with the idea that immunotherapy will have an immediate effect, and nothing could be further from the truth. Immunotherapy takes weeks to months to work and is something one plans for next season rather than for problems going on this allergy season.

When immunotherapy is combined with other forms of itch relief, even better results are obtained.

It Starts with an Allergy Test 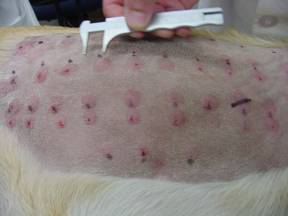 The term allergy test is something of a misnomer. By the time the patient gets to this stage, we are already pretty sure he has an airborne allergy (atopic dermatitis) based on clinical presentation. The testing we are about to describe is not a test to determine if a patient has allergies or not. In fact, it is even something of a leap to say that the patient is allergic to the substances that create reactions. Testing is done to assess the immunologic reactions in the skin so as to determine what substances would make the best ingredients for an allergy serum and what to avoid. When a substance generates reaction in the skin during the test or correlates to a high amount of antibody in the blood, that does not necessarily translate to an itchy dog.

Testing can be done by either intradermal skin testing or by in vitro (blood testing). For skin testing (IDST), the patient can be referred to a specialist or at least to someone who performs enough skin testing to maintain an appropriate collection of allergens for testing.

Blood (or In Vitro) Testing

In vitro testing does not involve special equipment such as an allergen collection. Instead, a blood sample is sent to a laboratory for analysis and generally it is not necessary to withhold anti-itch medications.

The patient must be held off anti-itch medications for a period of time, and how long will depend on what the medications are and what the particular veterinarian recommends. An area of skin is shaved and a grid of dots are drawn on the skin to mark where the allergens go. Sedation is generally not necessary but that depends on the patient, of course. Small amounts of allergens are injected into the skin (the selection of allergens varies by region and community depending on what pollens and plants are common), along with a saline control (which will define what no reaction looks like) and a pure histamine sample (which will define what a strong reaction looks like). After an incubation time of several minutes, the reactions in the skin are graded. The allergens creating the strongest reactions will be selected for the serum.

In vitro testing does not involve specialized equipment such as an allergen collection. Instead a blood sample is sent to a laboratory for analysis and generally it is not necessary to withhold anti-itch medications. The laboratory tests the blood for antibodies of the IgE class as these are the antibodies that generate allergy symptoms. The blood is tested for IgE antibodies against different pollens, grasses, dust mites and other airborne substances. Substances that have generated the highest amounts of IgE are selected for the serum.

What test method is best is highly controversial. Many dermatologists perform both skin and blood tests on patients in order to decide what allergens should be included in the hyposensitization serum. Some dermatologists feel the skin test is best and certainly the skin test is traditional. Others feel strongly about the in vitro (blood) tests. One would think that either test should produce the same results but this is rarely the case. Regardless of which test is used, a company is enlisted to make the serum vial for the individual patient.

It should be noted that neither skin testing nor blood testing produces meaningful results with regard to food allergies. For evaluation of food allergy, a diet trial is necessary and demonstrating IgE in the blood against a food substance does not indicate the presence of a food allergy against that substance.

Allergen doses are reflected in units called PNU (protein nitrogen units). The initial vials of serum to be used will be the weakest (maybe 1,000-2,000 PNU per ml). The patient will receive an increasing amount of allergen over time and will finally end with a maintenance vial that might be as concentrated as 20,000 PNU per ml.) Typically, injections start twice a week and eventually can be given every two weeks.

There are many dosing protocols that may be selected. Ideally the owner will be giving the injections at home but if this is not possible, the pet can be brought to the hospital for allergy shots. The owner is given a schedule showing when to give each injection and how much to give. The amounts will increase until it is time to move up to the next vial where the concentration of allergens in greater.

See a video demonstrating how to give injections to a dog.

Expect to be thoroughly educated in the art of giving injections at the time the serum is prescribed. It may seem daunting at first but is very simple. It helps if the pet receives a reward after injections. Used needles can be disposed of in the regular trash but it is helpful if they are placed inside a plastic or metal container (like a liquid laundry detergent bottle or closed coffee can) so as not to cause an accidental puncture.

In some states it is illegal to dispose of used syringes in the regular trash. You must instead return used needles to a needle disposal center or use a mail-in sharps container. In some states, medical wastes must go to medical waste landfills. In most cases, bringing the needles to the veterinarian’s office for disposal is acceptable. Your veterinarian can tell you what rules apply in your state.

Injections should be timed in such a way that the pet can be observed for 30 to 60 minutes after the injection to watch for reactions. Any reactions should be reported to the veterinarian before giving the next injection. Serious reactions are rare (less than 1% of patients have them) but you should still be able to recognize them.

Not so Serious Reactions that still Require Reporting

Reactions are likely to lead to some kind of adjustment of the protocol. Be sure you understand when you are supposed to return for any rechecks. ASIT is the preferred treatment of atopic dermatitis and has the greatest potential for long-lasting effectiveness with rare side effects.

Other Versions of Allergen Specific Immunotherapy

Rush Therapy
Traditional allergen specific immunotherapy can take six months to a year before one can even tell if it is working. What if the patient simply can’t wait that long? With rush therapy, the first 12 injections are given over six hours instead of over six weeks. The patient must be watched closely in the hospital for reactions during this time (hives, itching, swelling, or even something as serious as anaphylactic shock is possible, and the doctor must be there to promptly reverse any reactions with medication). After the rush period, the patient can jump into maintenance therapy in a week or two. While the risk of reaction is increased giving allergens to intensively to a sensitive patient, the procedure appears to be safe and is the method of choice in some dermatology practices. If you are interested in this version of allergen specific immunotherapy, check with the doctor overseeing your pet’s serum preparation.

Sublingual Immunotherapy (SLIT)
While this version of immunotherapy has been available to human allergists for some time, it is new to veterinary practice. In this situation an oral product is applied daily, sometimes several times daily, and there is no tapering schedule as there is with injections. This method has been shown to be helpful to dogs who did not respond to injectable immunotherapy (50% of dogs who failed traditional injectable therapy were able to respond well to sublingual therapy). The sublingual technique might also be preferable to owners who are not comfortable using needles. The risk of anaphylactic shock appears reduces with the sublingual technique compared to traditional injections. SLIT vials do not require refrigeration, unlike vials for injection. It is important that the patient not swallow the SLIT allergens so the product cannot be given in food and the pet cannot be fed for a time after the product is given. SLIT treatments are given once or twice daily whereas the injections are given far less frequently (every 2 weeks in the maintenance phase). Dogs that do not do well on injections often do well with SLIT, and vice versa.

In conclusion, allergen specific immunotherapy has changed the lives of allergic patients, both human and non-human. Pets with airborne allergies generally have an itchy season that can be expected to recur annually and frequently gets worse every year. While ASIT does not generally provide rapid results, it is usually very effective in the longer term or bigger picture. If you would like to consider this for your pet, ask your veterinarian for more details.