Parasitic organisms survive by attaching themselves to a host and using the host’s body to thrive, generally at the host’s expense. Parasites find themselves protected from the harsh temperature and moisture changes of the external world when they live within the rich, warm body of their host. The parasites this article is concerned with are bacteria that attach themselves to the actual red blood cell membranes of their host, happily riding around, feeding and reproducing until the host’s immune system sees them and begins destroying red blood cells in an attempt to remove them.

The agent of what has traditionally been called feline infectious anemia is an organism called Mycoplasma haemofelis. This creature is technically a bacterium but is a member of a group of bacteria called mycoplasmas. Mycoplasmas are different from other bacteria because they do not have a cell wall surrounding and protecting their microscopic bodies. They cannot be cultured in the lab like normal bacteria because they must reside inside living cells. This feature not only makes finding them a little tricky but it also limits treatment to antibiotics that can penetrate inside of a hosting cell. 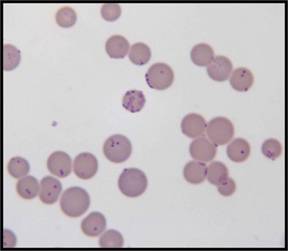 Hemobartonella felis, as it was then called, was first discovered in Africa in 1942 but it was not recognized as a mycoplasma until recently with the advent of gene sequencing. This led to renaming Hemobartonella felis to Mycoplasma haemofelis, though after decades of celebrity under the original name many veterinarians will still refer to it as Hemobart. Complicating matters further, gene sequencing has revealed a second species that was previously thought to be another variant of Hemobartonella felis. This one, which is smaller, has been named Mycoplasma haemominutum and does not appear to cause as serious an anemia as M. haemofelis; however, when combined with the feline leukemia virus, the M. haemofelis organism tends to create myeloproliferative disease in the host’s bone marrow, while M. haemominutum tends to promote the virus’s cancer-inducing abilities. The discussion that follows largely concerns Mycoplasma haemofelis and the immune-mediated anemia it causes.

The term feline infectious anemia has also recently been felt to be inaccurate as there are many infectious organisms that might cause an anemia, which is a lack of red blood cells. For this reason the disease has been re-named feline hemotropic mycoplasmosis, which literally means a blood infection of mycoplasma organisms in cats.

What Happens to the Infected Cat?

The infected sick cat is pale, sometimes even jaundiced, and weak. Anemic cats often eat dirt or litter in an attempt to consume iron. An infected cat may have a fever. The initial blood tests show not just red cell loss but a responsive bone marrow (the source of new red blood cells), which means that the cat’s body knows it is losing red cells and is trying to make more as quickly as possible to keep up. Cats with concurrent feline leukemia virus infection tend to have more severe anemia as the virus does not permit the bone marrow to respond.

When a cat is newly infected, it can take up to one month before there are adequate numbers of parasites to actually make the cat sick. Mortality is highest during the month following this initial stage. If the cat recovers, it becomes a permanent carrier, though stress can re-activate the infection.

How is Diagnosis Confirmed? 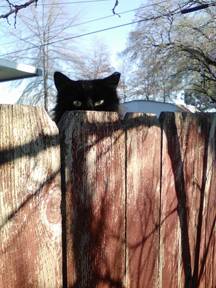 Confirmation of diagnosis has been problematic since the discovery of the organism. Because of the lack of cell wall and intracellular residence, Mycoplasma haemofelis cannot be cultured, which means one cannot simply culture a blood sample and isolate the organism the way one might isolate the organism causing something like a urinary tract infection.

Luckily, PCR technology has made diagnosis easier, though carrier cats can still slip by. Unless, organisms are seen on a blood smear, the PCR test is the type to request. PCR testing uses a technique that amplifies small amounts of DNA, such as parasite DNA, allowing for detection of tiny amounts. Through this type of testing, it has been discovered that up to 10% of healthy cats are carriers of this organism and that testing is best performed while the cat is not on antibiotics. PCR testing is able to determine not only whether the cat is harboring mycoplasma organisms but can determine which species the cat is infected with.

Which Cats are at Risk?

The cats at highest risk are those that roam outside in the spring and summer (obviously these cats have the highest risk for flea infestation). Cats that are statistically likely to be infected are male cats younger than 4 to 6 years of age, have a history of cat fights, and have incomplete vaccination histories (in short, cats with somewhat casual care, most likely including casual flea control).  Infection with the feline leukemia virus is also a factor in diagnosis. This may be because this immune-suppressive virus allows proliferation of the organism that is not possible in normal hosts or perhaps the anemia associated with the virus directly leads to a sicker cat who is thus more likely to see the vet and have testing. Making matters worse, the mycoplasma seems to enhance the ability of the feline immunodeficiency virus to create bone marrow cancers.

Blood sucking parasites such as fleas, ticks, lice, and mosquitoes are the leading candidates for spread of the organism. This makes flea control paramount in protection. Fortunately, there are numerous safe and effective products available to prevent flea infestation.

Cats can become infected by blood transfusion, though animal blood banks routinely screen donors so this is an unlikely route.

Infected mother cats appear to be able to infect their kittens though it is not entirely clear if this is done (prenatally, through milk, or by oral contact). Oral transmission from bites is thought to be possible but not confirmed.

If hemotropic mycoplasma infection is suspected, initiating treatment is probably a good idea as treatment is much easier than diagnosis. All mycoplasma infections are susceptible to tetracycline. In cats, the derivative doxycycline tends to be most easily dosed as it can be compounded into an oral suspension. Tablets must be used with caution as they can stick in a cat’s esophagus causing irritation and scarring; liquid formulations can be made through a compounding pharmacy. The quinolone class of antibiotics (enrofloxacin, etc.) is also effective against hemotropic mycoplasmas. Three weeks of medication is needed to adequately suppress the organism.

Killing the mycoplasma is only part of the therapy, however; it is the host’s own immune system that removes the red blood cells and this must be stopped. Prednisone or similar steroid hormone is typically used to suppress this part of the immune system so that the red blood cells are not removed as quickly. Very sick cats will probably require blood transfusions to get through the brunt of the infection. Happily, prognosis is fair if the diagnosis is made in time, as cats generally respond well and quickly to treatment.

Carrier cats are generally not treated. As long as fleas are controlled, a carrier cat is not contagious.

Can Dogs be Infected?

There is an organism previously called Hemobartonella canis (now renamed Mycoplasma haemocanis). It is not generally considered to be a problem except in dogs who have lost their spleens and thus cannot effectively remove infected red blood cells. Gene sequencing suggests that this may actually be Mycoplasma haemofelis able to disguise itself slightly when it lives in a dog’s body. Blood from infected dogs, however, will not infect cats. It is not clear at this time what the relationship is between these two mycoplasmas but it appears that cats cannot infect dogs and dogs cannot infect cats. There is a hemotropic mycoplasma disease in dogs but it is separate from the one in cats.

How Pets Enhance Our Health