What Does this Mean?

The small intestinal tract is a remarkable organ. It has to neutralize acid from the stomach, apply digestive enzymes and emollients, absorb and conduct away the microscopic nutrients, and move its contents from one end of our body to the other. There is also the matter of housing a variety of bacteria without allowing them to access the interior of our body; immunological reactivity; hormonal activity and response; and more. Its layers act as both a barrier and gateway, plus it must have muscle strength for tone and motion. Proper function depends in part on normal thickness of all the delicate layers.

Disease can lead to an influx of inappropriate cells into the layers of the intestine. This infiltration of the bowel by abnormal cells creates thickening and puffiness, which hampers function. The thick intestine does not contract properly, which leads to food pooling and sludging. Pooling and sludging leads to the sensation of nausea and malaise. The thick intestine also cannot absorb nutrients properly, which leads to weight loss and diarrhea. Frequently there is ulceration and bleeding as the membranes become unhealthy. 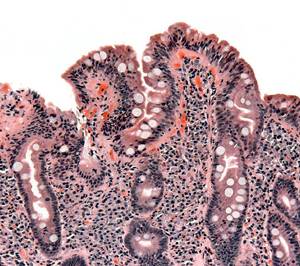 Bacterial populations become altered when the nutrients available to them changes in composition.  In other words, what sort of bacteria live in the bowel depends on what nutrients are in abundance around them. Different nutrients promote different bacterial populations for better or worse. Abnormal nutrient absorption can lead to an overgrowth of bacteria or at least an alteration in the proportions of different populations of bacteria, creating a bad neighborhood in the bowel. Toxic bacterial products can be produced. Bacteria can over-power natural barriers, allowing them to crawl up the pancreatic duct or bile duct where they create inflammation in organs that are normally sterile (pancreas and liver).

Obviously none of this is a good thing.

Fixing it Depends on Knowing the Nature of the Infiltration

There are two common diseases that involve infiltration: intestinal lymphoma and inflammatory bowel disease (IBD). Both diseases involve lymphocytes infiltrating the delicate bowel. In lymphoma, these are malignant cancerous lymphocytes. In the case of IBD, they are active lymphocytes reacting inappropriately to an immunological trigger (such as a food or bacterial waste product).  Biopsy is necessary to distinguish these two diseases and distinguishing the two conditions allows for the most effective treatment.

There are two forms of lymphoma: small cell and large cell. The small cell form is associated with a rapid and sustained response to therapy with remissions of one year or longer are common. The large cell form is nearly untreatable with remissions being unreliable or short in duration. Biopsy will determine which type a cat has. Confirmation of lymphoma also allows for a more tailored protocol so as to maximize the quality of remission.

IBD is an immune-mediated disease and treatment centers on suppressing the inappropriate immunological response so that the bowel can recover. Speciific diets may be employed to minimize inappropriate reactions to food in long-term management. It is theoretically possible, eventually, to recover from this disease completely, though most patients need long-term medications to control the inflammation.

The possibly good news here is that because both conditions involve lymphocyte infiltration, there is a great deal of overlap in therapy so it is possible to make up a treatment plan that will cover both possibilities with a reasonable chance of success. This not optimal but provides a route to inexpensive therapy. 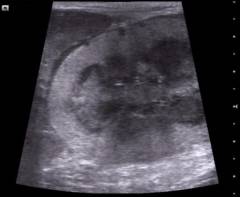 The normal diagnostic sequence involves (after basic examination and lab work to rule out metabolic issues) ultrasound of the belly followed by either endoscopy to obtain intestinal biopsies or exploratory surgery to obtain biopsies.  Why not simply skip to the biopsy? It turns out a great deal of information can be obtained by ultrasound. Ultrasound allows for evaluation of tissue not accessible during endoscopy or even surgery. Further, it may even be possible to get the diagnosis without the expense and stress of intestinal biopsy if tissue can be obtained by ultrasound guidance.

That said, there are some caveats to the use of ultrasound as the final diagnostic.  For example, there is a great deal of overlap in bowel thickness between what normal patients have, what IBD patients have, and what lymphoma patients have. Normal patients will not have abnormal layering but sick patients can have completely normal layering. More severe disruptions in layering are more typical of lymphoma, especially when they occur in separate segments, but less severe wall thickness change is not very specific.

Biopsy by Endoscopy or Surgery

If ultrasound findings are not specific and the diagnosis remains ambiguous, in a perfect world, referral for endoscopy or even surgery follows, biopsy samples are taken, and a tailored therapy can initiate or at least informed decisions can be made. Not every patient is stable for anesthesia, however, and not every owner is financially able to pursue a specialized procedure. There is controversy about whether full thickness biopsy samples (which can only be obtained through surgery) are worth the invasiveness of surgical exploration. Endoscopy allows the surface of the bowel to be viewed from the inside of the intestine so that a biopsy sample can be taken from a specific site. Endoscopy is vastly less invasive and the American College of Veterinary Internal Medicine has indicated that endoscopy is the preferred method of sampling.

As with ultrasound, there is a great deal of overlap in findings between lymphoma and inflammatory bowel disease as both conditions involve lymphocyte infiltration. PCR testing and Immunohistochemistry can be used to distinguish the two conditions once a tissue sample is obtained. (Cancer cells by definition stem from one cell gone cancerous and thus the entire group of lymphocytes involved in the disease will share genetic markers while inflammatory infiltrates come from a group of cells and will show much more genetic variability.)

Having a confirmed diagnosis allows for accuracy in prognosis and precision in treatment and may be well worth the expense of this extra step.

Treatment When we Are not sure which Condition is Present

Because there is a great deal of overlap between the treatment for IBD and the treatment for lymphoma, a therapy plan can be designed that covers both possibilities reasonably well. Typically this involves some kind of corticosteroid; possibly some kind of immunosuppressive medication; and possibly special diet, probiotics, and nutritional supplements.  Response to medication is generally rapid (within a week) for IBD though it can take up to two weeks, and a common lymphoma statistic is that 75% will achieve remission within three weeks regardless of protocol.  Longer remissions can be obtained with more tailored protocols but this way a reasonably priced therapy is possible.