What is a Disk?

Most people are aware that the backbone is not just one long, tubular bone. The backbone (or spine) is actually made of numerous smaller bones called vertebrae that house and protect the spinal cord. The numerous vertebrae that make up the spine allow for flexibility of the back. The vertebrae are connected by joints called intervertebral disks. 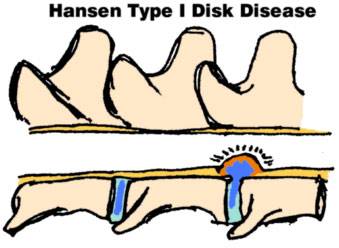 Hansen Type II Disk Disease
Again the normal disk is on the left (although in this diagram we did not draw in the nucleus pulposus). On the right the disk has been squashed between the adjacent vertebral bodies and the annulus fibrosis is bulging into the dorsal longitudinal ligament and spinal cord. 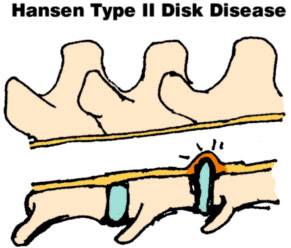 The condition where disk material presses against the ligament above and spinal cord is called disk herniation.

The most common sites of disk herniation are T11 – T12 (between the 11th and 12th thoracic vertebrae)
and L2 – L3 (between the 2nd and 3rd lumbar vertebrae).

C2 – C3 (between the 2nd and 3rd cervical vertebrae) is the most common site of disk herniation in the neck.

The area of the back or neck just over the disk involved is generally painful (whereas many degenerative spinal processes are not painful). In milder cases, pain at the site of the disk may be the only symptom. As inflammation increases in the spinal cord, neurologic deficits can occur. Disk herniations in the neck tend to have more pain and less dysfunction.

Hansen Type I Disk Herniation
As mentioned, in Hanson Type I disk herniation, the nucleus pulposus becomes dehydrated and mineralized. It loses its gelatinous cushioning properties and suddenly extrudes, slapping right into the spinal cord and its tender surrounding ligaments. The classic victim is a young dog of a breed that involves a long back and short legs, though any dog can be affected. The damage to the spinal cord can range from mild inflammation to total destruction. Nucleus pulposus is shown in blue.

Hansen Type II Disk Herniation
Here the degeneration is slower and the fibers of the annulus fibrosus become soft. As the disk is compressed by the normal forces between the vertebrae, the annulus fibrosus bulges upwards and puts pressure on the spinal cord more slowly. The classic victim here is an older large breed dog.  German Shepherd dogs seem predisposed.

When presented with a patient with spinal weakness, it is important to determine whether the problem involves spinal cord compression because compressive lesions can benefit from surgery/anti-inflammatories while other diseases cannot. A compressive lesion in the spinal cord does not have to be a disk herniation; it could be a vertebral fracture or dislocation, a tumor, or a disk infection. A non-compressive lesion will not benefit from surgery. Such lesions include: spinal degeneration, spinal infection or inflammation, demyelination injuries, or fibrocartilaginous embolism.

Step Two: Plain Radiographs
While advanced modes of imaging such as magnetic resonance imaging (MRI) and computed tomography (CT) scanning are not available to most veterinary hospitals, plain radiography usually is. It is also relatively inexpensive compared to other forms of imaging. The first step of imaging typically involves plain radiographs to rule out obvious spinal issues. Broken bones or dislocations are generally obvious. Calcified disks and disk space collapse can often be seen. The location of a disk herniation can be determined in 50-75% of disk cases. Radiography of the neck requires general anesthesia or sedation to get proper relaxation of the muscles.

Step Three: Advanced Imaging
If surgery is being considered, then it becomes necessary to identify the exact disk space involved so that the surgeon will know where to cut. Classically, myelography has been the next step. Myelography requires general anesthesia and the injection of iodine based dye around the spinal cord. The image of the dye can be seen to narrow at the area of spinal cord compression identifying the area of compression in 85-95% of cases. The patient typically then goes directly to surgery without waking from anesthesia. As a general rule, there is not much point in performing a procedure to specifically localize a compressive lesion unless surgery is being considered. 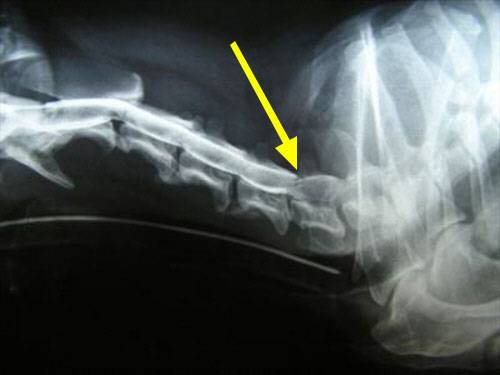 As CT becomes more available, a scan is often performed in addition to or instead of a myelogram. This gives an even more accurate image of the disk herniation and its location, as well as whether there is more than one disk involved.

Once it is clear from the radiographs and neurologic examination that the patient has disk disease, the decision must be made as to whether or not surgery should be pursued. Spinal surgery is very expensive and requires a long recovery period but may be the best choice if the dog is to regain normal function. There are some general rules that are typically applied in making this decision:

Losing the ability to walk is an emergency. Do not wait to see if it gets better; go to the vet at once!

Medical/Conservative Treatment (No Surgery)
It would be wonderful if there were a magic medication that could completely relieve the pain and inflammation in the spinal cord but, sadly, medications are merely of secondary importance here. While medication can be used to assist in recovery, the centerpiece of therapy is CONFINEMENT. Confinement must be strict, which means a cage or pen must be provided. This will be difficult as the dog will typically not want to be isolated and may cry or fuss. An owner will be tempted to say that the painful dog will confine himself. In reality, poor results in a dog are almost always traceable to inadequate confinement and if cage rest is not possible at home, consider boarding the dog at the veterinary hospital to ensure proper rest. The dog can be walked (or carried) outside to urinate and defecate but then must be walked (or carried) right back in.

Three weeks of cage rest is a minimum course. After this time, the patient can take another 2 to 3 weeks to gradually resume normal activity.

Medications typically accompany confinement. Steroids, non-steroidal anti-inflammatories, muscle relaxants, and pain relievers are commonly prescribed. Often the patient is hospitalized for the first week or so of confinement so that cage rest can be accompanied by injectable medications and progress can be monitored. Ice packing applied for 10 to 15 minutes (with a cloth separating the ice pack from the dog) are also helpful in relieving inflammation. During the first 3 to 5 days of an acute episode, icing can be performed as many times daily as possible ultimately tapering to three times daily for the duration of the confinement or for as long as there is pain.

The dog should at no time be left free to run and jump during the recovery period, even if he seems to be feeling good. Agility, jumping and fetching games or other performance activities are best removed from the dog’s lifestyle permanently lest another disk herniated.

Patients who have suddenly lost the ability to walk may be treated conservatively as above but their best chance at regaining the ability to walk is with surgery. Conservative management works best for dogs that are able to walk, have pain perception in their feet, and have both urinary and fecal continence.

Physical therapy for pets is a relatively new field of specialization and we are finding that rehabilitation exercises make a huge difference to patient comfort and ability in many situations. Ask your veterinarian about a referral.

Spinal surgery is highly invasive, very expensive, and with potential for great outcome as well as poor outcome depending on the damage already sustained by the spinal cord. Patients are generally not candidates for surgery unless they cannot walk, have only been paralyzed for a few days at most, and, of course, have a disease (such as disk herniation) where there is pressure on the spinal cord that can be relieved surgically. There is frequently a great deal of nursing care following surgery along with physical therapy. Spinal surgery is generally performed on an emergency basis.

The first step will be localizing the area of the compression. A patient may have several areas of disk disease but the surgeon will need to know which one is the active one. This will require some kind of advanced imaging such as CT scanning, MRI imaging, or myelography. The patient commonly goes directly to surgery after imaging without being awakened from general anesthesia.

Several procedures can be used to decompress the spinal cord and remove the disk material. Several common procedures you may hear about are: hemilaminectomy, pediculectomy, dorsal laminectomy, ventral slot, and fenestration.

Hemilaminectomy
This is most commonly performed on disk herniations in the thoracolumbar area. In this surgery the articular facets (where the two vertebrae connect) are removed, as is the vertebral bone adjacent to the spinal cord. This procedure can safely be performed over up to five adjacent disk spaces.

Pediculectomy
Similar to hemilaminectomy except only the articular facets are preserved. This is best performed when the disk herniation is slightly off to the side rather than straight upward. This procedure is less invasive and less destabilizing to the vertebrae than is hemilaminectomy.

Dorsal Laminectomy
This is probably the most invasive of all the procedures and involves decompressing the spinal cord from the top rather than from the bottom. It can only be done over one disk space and involves removing the dorsal spinous process and lamina as shown below.

Ventral Slot
This procedure is reserved for neck disks. Here a slot is drilled in the vertebral bodies of the bones on either side of the disk creating a small window over the disk space. Mineralized disk material can be removed and, since the window includes adjacent bone, there is room for the swollen spinal cord to decompress.

Fenestration
This is a preventive procedure often performed on the disk spaces near the herniated space. It involves making a slit over the annulus fibrosus and removal of any mineralized nucleus pulposus. For some patients, this is the only surgery needed but it is not truly a decompressive surgery. Whether or not fenestration truly reduces the chance of recurrence of signs is a controversial subject.

The goal of surgery is to restore the pet’s quality of life. In most cases this means return of the ability to walk. How long it takes the patient to walk again after surgery is highly dependent on how much dysfunction the dog had prior to surgery. Patients with voluntary motor control commonly recovery the ability to walk within 2 weeks while those with deep pain but no voluntary motor control might require up to 4 weeks. Nursing care for a dog that cannot walk can be intense, including expressing the patient’s bladder, keeping the patient bedded, and performing physical therapy exercises. Check with your surgeon regarding the exercises listed above as to which might be recommended for your particular pet.

When the Pet is not Expected to Walk

Taking care of a dog that is down in back is a big project, and definitely not something that every dog owner is able to commit to. Still, it can be done and for the right dog and the right person, it is a highly rewarding experience. A great deal of progress can often be made using physical therapy exercises as described in the medical management section, plus there are a number of resources and products available to assist caring for an immobile pet.

Physical therapy for pets is a relatively new field and we are finding that rehabilitation exercises make a huge difference to patient comfort and ability in many situations. Physical therapy is an area that not all veterinarians are comfortable performing. Discuss with your veterinarian whether referral to a specialist would be best for you and your pet.