Hip Dislocation in Dogs and Cats

In order to understand how hips dislocate and how they can be put back in place, some knowledge of the anatomy is needed. The normal hip joint can be described as a “ball and socket.” The thigh bone, called the femur, possesses a head that constitutes the “ball” part of the hip joint while the socket is an area of the pelvic bone called the acetabulum. In other words, the femoral head and acetabulum form the ball and socket of the hip joint.  The femoral head is held in place by a thick ligament called the capital ligament, or simply the round ligament of the femoral head, which spans across the center of the joint. Also keeping the bones in their proper location are the muscles of the hip, the upper rim of the acetabulum that acts as a protective ledge, and the fact that the whole joint is enclosed in fibrous capsule.

Hip dislocation is the common term for the separation of the femoral head from the pelvic acetabulum. The medical term is hip luxation, and you will probably hear your veterinarian use this term. In order for the hip to luxate (dislocate), trauma must be severe enough to break the capital ligament and tear the joint capsule. The femur almost always luxates the same way: up and forward.

A radiograph is necessary to confirm the luxation but it will be clear simply from looking at the patient (assuming he or she is walking) that a major orthopedic problem exists. The patient will not be bearing weight on the affected leg and the leg may seem shorter than the other three.

If the luxation is not corrected, a false joint consisting of scarring and fibrous attachment may form, and the patient may begin to bear some weight again but not in a normal way. False joints of  this sort are not very strong and do not afford normal range of motion but may be adequate for a very small patient such as an indoor cat or sedentary toy breed dog. That said, better results are obtained if the hip can be put back together in its natural configuration.

Sometimes it is possible to tell by feeling the joint whether or not it is luxated. However, radiographs are still necessary in patient evaluation because there is additional information to be obtained beyond simply whether or not the joint is luxated. Sometimes when the capital ligament tears, a chip of bone from the femoral attachment comes off as well. If the luxated hip were simply popped back into place with the chip in the joint, the chip would forever be trapped to grind painfully inside the joint. Instead, it should be surgically trimmed.

Radiographs are also important to assess hip dysplasia (the shallow acetabula of this condition may impede manual joint placement or may determine right off the bat that a surgical correction is needed. If the patient is a puppy or kitten, there is a growth plate (an area where the bone is growing) that may have been damaged in the trauma and this must be assessed. In short, the status of the hip beyond know whether or not it is luxated is important in selecting treatment.

Reduction is the act of putting the bones of the luxated joint back where they belong. Closed reduction means that the bones are put back without surgically opening the joint.  If the hip appears to be normal other than the luxation, it is probably worth at least attempting closed reduction; although, after three days, local muscle contraction makes successful reduction difficult. In cats, closed reduction is problematic no matter how old the luxation is as the reduced hip frequently pops out again. Still, as mentioned, closed reduction is a non-invasive procedure and is worth a try if the hip is otherwise normal.

To reduce the luxated hip, the patient must be anesthetized to relax the local muscles. The femoral head is manipulated back into place (often with a satisfying pop). Radiographs confirm the reduction and a specific type of sling is used to keep the hip bones together while the joint capsule around them heals. The sling, called an Ehmer sling, involves flexing up the knee and taping the foot to the thigh. The sling stays on approximately 1 to 2 weeks, while the patient leads a confined lifestyle indoors at home. The bandages must stay clean and dry. After the sling has been on an appropriate time, the sling is removed and confinement continues another 2 to 4 weeks.

This may sound simple enough but it is not always successful. Large dogs are difficult to manipulate. Cats tend to promptly reluxate their hips. Do not be surprised if closed reduction does not work and surgery is recommended.

There are many techniques of surgical treatment that might be employed in keeping the bones where they are supposed to be. In a perfect situation, the hip is reduced and there is only a small tear in the joint capsule. Sewing the joint capsule back together hold the femoral head where it belongs in the acetabulum.

Another technique uses a pin passing from the femur, out the femoral head and into the bone of the acetabulum like an axle.

This surgery is commonly referred to as the FHO and is best used for smaller dogs who are 50 pounds or less, very active dogs, or cats. Here, the femoral head is cut off and removed, allowing the joint to heal as a false joint (just a capsule connecting the two bones but no actual bone to bone contact). If the pet is not carrying too much weight, a false joint is strong enough. If the dog is very active, a false joint will form quickly. The pet typically does not want to use the leg for the first 2 weeks but should at least be partially using it after 4 to 6 weeks. The leg should be used nearly normally after a couple of months. Many veterinarians are well experienced with this surgery. FHO surgery is typically substantially less expensive than the other procedures.

If the patient has significant hip dysplasia, this may be a good time to address the dysplasia surgically. 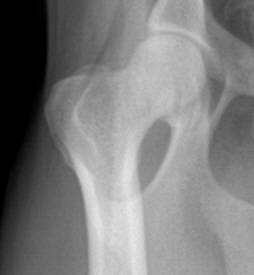 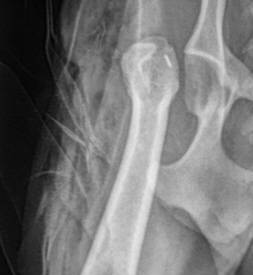