In a 2013 study by the market research firm Kelton Global, 81 percent of respondents considered their dogs to be equal in status to human family members. That seems a lowball figure to me. Judging by the number of people in my dog run whom I know only as 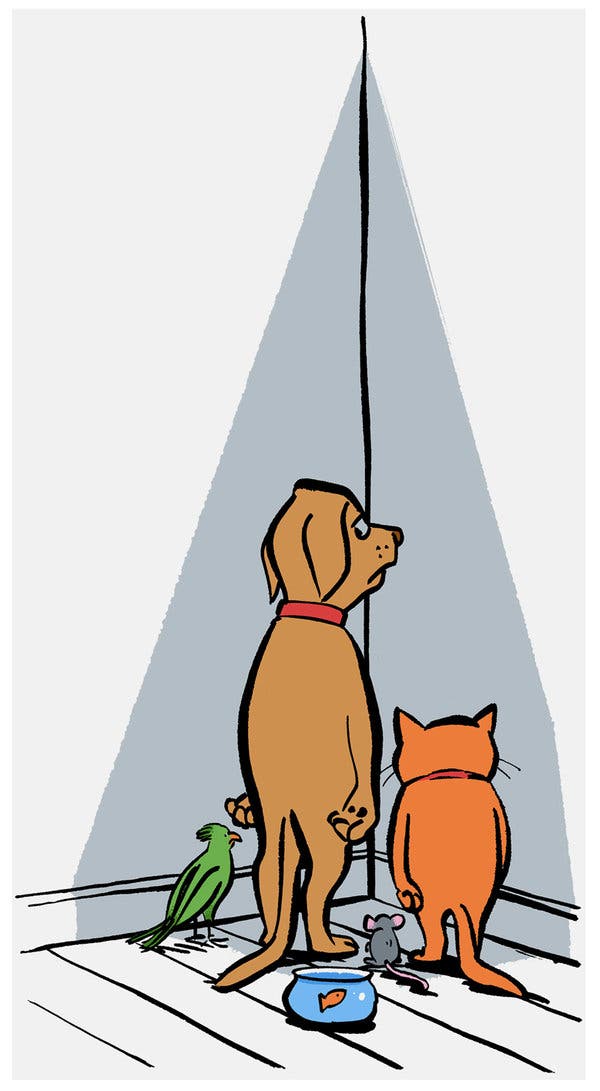 Walter’s dad or Puffy’s mom, I’d say the number is closer to 100 billion percent. But let’s not quibble about numbers. This much is clear: Treating our pets like children means we might indulge them a little. O.K., a lot. My point is, people who love their pets too much sometimes encounter problems, and for that, several recent books come to the rescue.

Sarah Hodgson’s MODERN DOG PARENTING: Raising Your Dog or Puppy to Be a Loving Member of Your Family (St. Martin’s Griffin, paper, $16.99) tackles this issue head on. Hodgson argues that none of us should be embarrassed about making the dog/child comparison, as dogs really do have the emotional and brain capacity of a 2- to 3-year-old. Forget the model of your dog as a wolf; the truth is, there is very little wolf left in your Shih Tzu.

The approach to your dog varies somewhat by the amusing types Hodgson imagines. (Do you have a Party Animal? An Overthinker? A Head-of-the-Class?) But in general, Hodgson says, dogs are so hard-wired to please that their bad behaviors are really “a cry for help.” Like children, dogs crave attention, even negative attention. Which is how dog owners often reinforce the behaviors they’re trying to eradicate. So, for example, when you are quietly reading and your dog starts barking, yelling at the dog is still giving him what he wants: He is not hearing “You are Satan on four legs” so much as “Whooosa good boy? Yurra good boy!” Hodgson argues persuasively that in all kinds of training situations, rewards work far better than punishment. So chuck the shock collar and break out the Liv-A Snaps, and you will be more successful in solving common problems, from barking to chewing your shoes to less savory habits, like what Hodgson cheerfully labels “stool-swallowing adventure hour.” (Fun fact, according to Hodgson: Remember the old days when our ancestors didn’t have outhouses? Dogs remember. In those days, one of their jobs was eating stool.)

I love cats . . . in YouTube videos. In the fur, not so much. If I wanted to take care of creatures that hold me in contempt, I would just have more children. CATWISE: America’s Favorite Cat Expert Answers Your Cat Behavior Questions (Penguin, paper, $18) and THE TRAINABLE CAT: A Practical Guide to Making Your Life Happier for You and Your Cat (Basic Books, $27.99) did nothing to change my mind, but at least they made me understand why other people would let cats claw their way into their lives. “CatWise” is simply a very good Q. and A. by the feline expert Pam Johnson-Bennett, who answers every question imaginable for the new cat owner, from “Is it better to adopt two kittens instead of just one” (Yes) to “I’m getting a kitten from the shelter soon and am considering having her declawed. . . . Is this a good idea?” (No — and here’s how you can save her claws and the furniture). The one question she doesn’t answer, however, was the one uppermost in my mind: Do I look really sad sitting by myself on the subway, reading a book about cats?

After picking myself off the floor from the cover photo — a kitten who, from his transfixed expression, appears to have found God — I am introduced to the interesting premise of John Bradshaw and Sarah Ellis’s “The Trainable Cat”: namely, that cats are indeed trainable and that, moreover, you will enjoy training yours. You just need patience. Lots of it. But Ellis, a feline behavior specialist, and Bradshaw, an anthrozoologist (don’t feel bad, I had to look it up too), swear it’s true — if you start from the idea that cats want security above all, and misbehave when their security is threatened. The other key to training is that any action you take to influence the cat’s behavior must be done immediately, because 30 seconds later the cat, not unlike a viewer of Fox News, is on to other things. The goal here is not to get your cat ready for the Big Apple Circus, but to make it easy for you to get your cat to do all the things many cats resist: swallow a pill, go to the vet, take a bath, or stop trying to disembowel your new cat. The secret is often shrimp, or meaty paste in a syringe. My favorite tip is this: To get a cat used to a new home, you take some white cotton gloves and basically feel up your cat, then rub the gloves all over the furnishing. Smelling her own scent, the cat will believe she’s been there before and calm down. This is genius. If only we humans could do that. Thinking back on being single, there were some perfectly nice, bland men I wish I could have rubbed with some bad-boy scent to make them seem right to me. Things might have worked out differently.

PETS ON THE COUCH

In PETS ON THE COUCH: Neurotic Dogs, Compulsive Cats, ­Anxious Birds, and the New Science of Animal Psychiatry (Atria, $26), Nicholas H. Dodman aspires to be the fur-and-feathers Oliver Sacks. He doesn’t entirely succeed (who would?), but he presents fascinating case studies that suggest animals suffer from some of the same mental disorders we do — and can and should be treated with similar medications. Your sweetheart of a pup who suddenly flies into a biting rage might have a seizure disorder; your cribbing horse who turns in circles or bites his flanks even where there are no flies around might have a form of Tourette’s. Compulsive tail chasers mimic the self-soothing flapping of people on the spectrum, while pets who are terrified by things like puddles of water suggest an autistic person’s seemingly irrational fears. The solutions to solving common pet problems are fairly straightforward and not the focus of the book, though I love some of the “well, duh” suggestions: “A hot dog — the canine equivalent of an olive branch . . . goes a long way toward cementing a friendship.” At any rate, in the process of discussing how to help highly neurotic animals (he is a proponent of human sedatives, antidepressants and opiate blockers in certain circumstances), Dodman tells stories of owners’ unwavering devotion — the guy who lost more than $30,000 worth of rugs, drapery and ruined appliances trying to fix his cat’s incessant territory marking — as well as unimaginable cruelty. There is one story of a woman who starved her dog and kept him in a crate almost 24 hours a day; the traumatized, fearful animal ended up in Dodman’s office having surgery for intestinal blockage after wolfing down a box of tampons. While I struggle with the ethics of the death penalty for humans guilty of murdering another human, I think I could personally flip the switch on anyone who treats an animal this way.

And maybe this is because animals, and dogs in particular, ask for so little and give so much. As someone who has spent hours weeping over the stories of dog rescue and training on the reality TV show “Lucky Dog,” I was pleased to see the trainer Brandon McMillan coming out with LUCKY DOG LESSONS: Train Your Dog in Seven Days (Harper­One/HarperCollins, $27.99). Concentrating on rescues and “problem” animals, McMillan’s methods are muscular (as befits the hunky heartthrob of dog training) and labor-intensive, and come with the caveat that constant reinforcement is key.

Julie Barton’s memoir, DOG MEDICINE: How My Dog Saved Me From Myself (Penguin, paper, $17), is not exactly how-to, but deserves mention here. It’s the story of her struggle with clinical depression, and perhaps it should have been called “Amazing Grace”: Barton was lost, and now she’s found, and what found her was not God but a golden retriever named Bunker. It’s a harrowing story told with gentleness and wit. If the other books here are about how we can help our pets through rough times, “Dog Medicine” is about what they do for us. If we treat our pets like children, maybe it’s because they have the power to turn us into the responsible, loving people we want to be.

Judith Newman is working on a book called “To Siri With Love,” about children, autism and the kindness of machines.