Save Wildlife for the Next Generations

The vanishing animals that future generations will never see 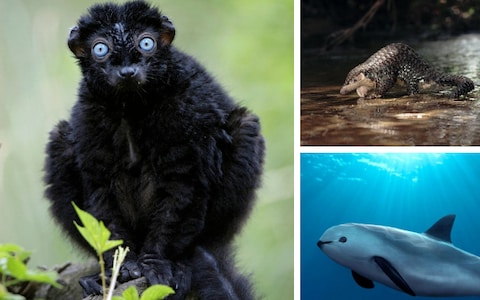 A blue-eyed black lemur, a pangolin and a vaquita which could all soon be extinct  Credit: WWF

Some of the world’s most exotic animals could be extinct within months, conservationists have warned, with future generations growing up in a world without many of the species that are alive today.

The WWF claims that some animals, such as the vaquita porpoise, could be wiped out in the next few months.

Some would now be extinct had zoos not provided a ‘Noahs Ark’ from which to reestablish populations.

Habitat loss, poaching, hunting and disease are pushing many species to the brink to such an extent that the world has now entered a sixth mass extinction.

More than 23,000 species are on the IUCN Red List threatened with extinction, including 41 per cent of the world’s amphibians, 25 per cent of mammals and 13 per cent of birds.

Numbers of vaquita – dubbed the panda of the sea – have dropped by 90 per cent since 2011 because the porpoise are getting tangled in illegal fishing nets.

There are only 30 now left in the wild, and all live in Mexico’s Gulf of California. Conservationists have warned they could be extinct by the autumn if the Mexican government does not do more to protect the area.

Chris Gee, Head of Campaigns, WWF-UK said: “Time is rapidly running out for the Vaquita, we could tragically lose the ‘panda of the sea’ in a matter of months.

“The last hope for the species is the Mexican government immediately putting in place and properly enforcing a permanent ban on gillnets.”

Lis Key at International Animal Rescue said pangolins – the world’s most trafficked animal – were also in danger of dying out within a generation. Orangutan s and slow lorises are also critically endangered because of poaching and habitat loss.

“The pangolin could become extinct before most people even know what it looks like,” she said.  “I’m not sure whether it could be gone within the decade but certainly within decades.

“The figures used when talking about pangolin trafficking usually refer not to individuals but to the number of truckloads. Tragic.

“In terms of orangutans and slow lorises which are our area of work, both are Critically Endangered so one step away from extinction, owing to the continuing rapid rate of habitat loss and the effects of illegal hunting.

“Unless action is taken to halt these activities, the future is bleak for both species.”

Elsewhere, there are fewer than 100 Javan Rhino left in the wild because of poaching and Save the Rhino has estimated that they could become extinct within the next decade or sooner.

In March a rhino was poached from a French zoo, the first time such an incident has ever been recorded, and demonstrating the demand for rhino horn. Three rhino are killed a day on average in South Africa alone.

There are also only around three dozen scimitar-horned oryx in the wild after they were hunted to extinction by trophy hunters who prize their twisted horns. A successful breeding programme of captive oryx allowed them to be reintroduced to the Middle East, but they are hanging on precariously.

In Madagascar there are only around 100 blue-eyed black lemur left in the wild, and according to the University of KwaZulu-Natal in Pietermaritzburg, South Africa they will have died out by 2026. Equally the Silky Sifaka, lemur is also in peril, with only 250 creatures remaining.

“There are tons of species that are in desperate need of our help and which could be gone in just one or two generations,” said Niki Rust, Technical Advisor at WWF.

“Many of the populations are so small and so isolated that it would only take a disease to wipe them out.

“Some of the lemurs in Madagascar are hunted because the locals believe they are evil spirits. They are als suffering from habitat loss.

“But there are conservation success stories. Mountain gorilla populations are increasing and we now have around 800 in the wild. Golden-mantled Tree Kangaroos also seem to be stabilising.”

Heather Sohl, Chief Advisor on Wildlife at WWF-UK added: “The numbers can be devastating, but it’s not too late, with greater protection we can help to secure a positive future for endangered wildlife.