Aspergillosis in Dogs, Fungi of the Aspergillus genus are well known to most people as the lacy, fluffy mold that grows on foods kept a bit too long. There are over 180 species of Aspergillus fungi and they generally do not cause disease unless the host has a compromised immune system or has a big exposure to the fungus. The most common species to cause problems in veterinary patients are Aspergillus fumigatus and Aspergillus terreus.

Under the microscope Aspergillus looks like a beautiful flower but note the spores (called conidia) it sheds. These float in the air to colonize organic matter or infect a host when they land.

There are two common types of Aspergillus infection in dogs: 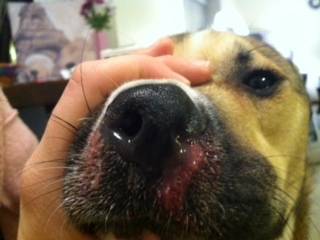 Sinonasal aspergillosis is the most common type of Aspergillus infection. Sinonasal infections can be very invasive or less invasive, the very invasive kind unfortunately being much more common. Invasive infections actually destroy the delicate bones of the nasal sinuses while the less invasive infections involve formatting a big mucous wad of fungus called a “fungal ball” or “aspergilloma.” Advanced imaging can detect either of these but more on that later. What the owner usually sees is a snotty nasal discharge that often stinks, lasts for months, does not respond to antibiotics, and classically only comes from one nostril. Nose bleeds occur intermittently, and the edges of the nostrils are often ulcerated.

Classically, the affected dog is of a breed with a long nose (collie, greyhound, dachshund etc.) though in one study, retrievers and rottweilers showed highest numbers, possibly suggesting they do more sniffing in fungal contaminated areas. Any age dog could become infected though aspergillus infection is unusual in dogs under age 1 year.

To diagnose sinonasal aspergillosis, two out of the following criteria must be met:

A typical approach to a dog with a nasal discharge suggestive of fungal infection will likely involve imaging, followed by rhinoscopy. General anesthesia is needed for both of these procedures and referral is likely to be recommended as specialized equipment will likely be necessary.

The treatment of aspergillosis has been challenging for many years; fungal infections as a rule are slow to clear and for a long time the only available drugs had toxic side effects. Today, sinonasal aspergillosis has a good prognosis thanks to a unique treatment plan. The patient is anesthetized and the back of the throat and is closed off with gauze and inflatable balloon catheters called Foley catheters. The nostrils are also closed off (the patient breathes through an endotracheal tube that is placed through the mouth) and a one percent solution of clotrimazole, a topical antifungal lotion, is infused into the nose and frontal sinuses. The solution incubates for an hour and the patient is periodically turned to be sure all the nooks and crannies of the sinuses are treated. At the end of the incubation, the clotrimazole is drained through the nostrils and suctioned out.

This treatment is highly effective with an 86 percent success rate though about one-third of patients require several treatments. Most of the time the nasal discharge has resolved within a couple of weeks, but if there is still evidence of continuing infection one month after the treatment, the patient should be rechecked and another of bout of treatment will most likely be needed.

If there is evidence that the infection has eroded through the sinus bones and has penetrated the brain, the treatment described above cannot be used and oral medication is needed. Common medications used are itraconazole and fluconazole. Several months of therapy are needed and a 60 to 70 percent success rate has been reported. 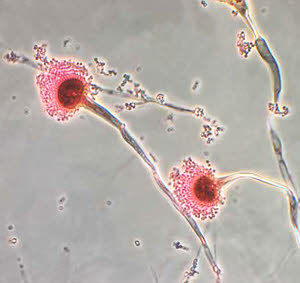 Under the microscope Aspergillus looks like a beautiful flower but note the spores (called conidia) it sheds. These float in the air to colonize organic matter or infect a host when they land. Photo by CDC.

As shown in the photograph, Aspergillus fungi shed microscopic spores that float in the air and which we inhale all the time. Fortunately, we have an assortment of safety mechanisms built into our bodies that prevent infection (sinuses to trap inhaled debris, ability to sneeze, mucus lining of the entire respiratory tract to trap debris, cilia to remove mucus with trapped debris, and an immune system to fight infection). If Aspergillus spores called conidia escape these mechanisms and begin to grow, they become more difficult for the body to remove. In disseminated aspergillosis, the fungus penetrates the respiratory tract and may travel to other organs via the bloodstream, creating a more serious fungal invasion. German Shepherd Dogs seem to be predisposed to this type of dissemination.

Symptoms experienced by the patient depend on where the fungus settles. Bone infection is common and the intervertebral discs of the spine also tend to be favorite spots for Aspergillus. This means that clinical features commonly include lameness, weakness, and incoordination. Frequently there are draining tracts (holes with pus or bloody discharge oozing out) in the areas of infection. Fever, weight loss, appetite loss, and uveitis (deep inflammation of the eye) are also features. Sadly, most dogs are already terminally ill by the time they are first examined.

Diagnosis is tricky. Bone destruction patterns on radiographs may be suggestive of fungal infection. If you’re lucky, the organism can be identified in some of the draining fluid or in a tissue sample. If the organism is not visible, it may be cultured from fluid or tissue sample. Ideally, there would be a blood test for Aspergillus antibodies that could make the diagnosis non-invasively and, while such antibody tests exist, as mentioned, it is hard to interpret them. There are accuracy issues plus different species of Aspergillus do not cross-react so one must test separately for each Aspergillus species.

Treatment is particularly frustrating for disseminated aspergillosis. At present, posaconazole seems to be the best choice but years of treatment are likely required (very likely the medication will be for life) and many dogs still die of their disease before the medication can get the condition controlled.