Growing Pains in Dogs, We have all heard the term growing pains and when this term is applied to dogs, more often than not it is referring to panosteitis. Growing pains in children involve leg pains of unclear origin which generally resolve when the child enters teen years. Panosteitis in dogs is a specific painful bone condition involving the long leg bones of large breed dogs generally between ages 5 and 18 months. The condition can be quite painful during its flare-ups but ultimately resolves permanently when the pup outgrows it. As in humans with growing pains, the cause of panosteitis is not clear cut. Panosteitis is often referred to as growing pains because of the similarity to the human malady.

Diagnosis of panosteitis is relatively straight-forward. The clinical picture of an adolescent large breed dog with a long bone lameness is suggestive of numerous developmental bone diseases, and panosteitis is only one of them but it does have some characteristic features: hypertrophic osteodystrophy, osteochondrosis dissecans, panosteitis, etc. In panosteitis, there is a slight predisposition of males over females, and while larger breeds are more usually affected, any breed potentially could develop this condition. The lameness can shift from one leg to another and can be accompanied by fever. Painful episodes last two to five weeks typically but recur, often changing legs, until the puppy outgrows the condition. Some individuals experience a recurrence around age 2 years, but again the symptoms simply regress as before. 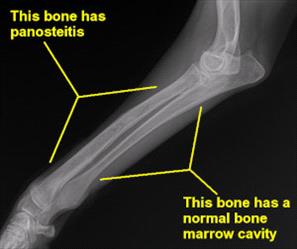 Panosteitis features a cloudy appearance of material in the bone marrow cavity. The patient above has a normal ulna (note the smooth internal texture of the lower bone) but the radius has panosteitis (the internal texture looks rough on the upper bone). Photo by MarVistaVet.

In panosteitis, characteristic cloudiness in the bone marrow cavities is visible on radiographs. If there is any doubt about whether these lesions are really there, radiographs can be repeated in a couple of weeks and the lesions will likely be more prominent.

The classical cloudiness is seen in the adjacent radiograph. If there is still any question of the diagnosis in a given patient, a nuclear medicine scan will definitively settle the question, but this is rarely necessary.

What is actually happening inside a bone with panosteitis is complicated. A bone’s marrow cavity contains two types of marrow: hemopoietic marrow which produces blood cells and fatty marrow which is basically just fat. In panosteitis the fatty marrow is replaced with fibrous tissue. The fibrous tissue is then replaced by a type of bone called woven bone. Woven bone is represented by the fluffy blurriness seen on the X-ray image.

The marrow cavity can be nearly obliterated by encroaching woven bone. Eventually, the normal bone cells involved in bone remodeling take over, building new bone where it should be and dissolving bone where it should not be. Ultimately, the bone tissue is re-structured back to normal.

What causes all this to happen in the first place is unclear and open to speculation. There is some evidence of an infectious cause: a normal dog will develop panosteitis if it receives a bone inoculation of marrow from an affected dog. The fact that some dogs develop a fever and high white blood cell count during panosteitis is further evidence of an infectious cause. Bacteria have not been cultured from panosteitis lesions but, it has been surmised is that a virus is involved. Still, despite extensive study, an infectious agent has not been isolated.

Another theory is that the recent trend in high protein dog foods is to blame. The idea here is that protein accumulation in the bone marrow leads to swelling inside the bone. Because the bone is a rigid structure and cannot expand, pressure is exerted on the blood vessels leading to tissue death, inflammation and the panosteitis phenomenon. This is still just theory.

Since there is a breed predisposition for panosteitis (German shepherd dogs, Golden retrievers, Basset hounds, Doberman pinschers, and Labrador retrievers), this implies a genetic basis. It has often been noted that most of the breeds predisposed to panosteitis are the same ones predisposed to the genetic blood clotting disorder called Von Willebrand’s Disease. It has been suggested that dogs with panosteitis be screened for Von Willebrand’s Disease as part of their evaluation.

The cause of panosteitis is still a matter of theory and investigation. No one really knows what causes it.

As mentioned, the only treatment is pain relief until the dog outgrows the condition. For most dogs this means one of the anti-inflammatory pain relievers made for dogs. If this is inadequate,combinations of adjunctive therapy and pain relievers can be used. The ultimate cure, however, is time.