Insulinoma in Dogs, The pancreas is a small light pink glandular organ nestled under the stomach and alongside the duodenum (upper small intestine). The endocrine pancreas is the part of the pancreas that secretes hormones involved in blood sugar regulation, such as insulin and glucagon. The exocrine pancreas produces enzymes we use to digest our food. These two parts of the pancreas are not in separate areas but instead, these two different types of pancreatic tissues are all mixed together throughout the entire pancreas.

If you already know too much insulin is being produced, you can be pretty sure you are tracking down an insulinoma but if a diagnosis is not clear after all the blood testing described above, ultrasound is still a good next choice. Tumors other than insulinoma can cause hypoglycemia (though they will not produce excess insulin) and ultrasound will be helpful in finding them. Most notoriously the hepatoma (also known as the hepatocellular carcinoma) and smooth muscle tumors (both benign and malignant and usually found in the spleen) also cause hypoglycemia. Other tumors potentially can consume enough blood sugar to create hypoglycemia and ultrasound would be an excellent way to find any.

With ultrasound, lesions in the pancreas as small as 7 mm in diameter can be identified and, in one study, it was able to locate the pancreatic tumor in 75% of cases.

CT scanning is not as readily available as ultrasound, but it does offer some benefits over ultrasound if it is possible to do a CT scan instead. With ultrasound, we want to confirm that there is a tumor in the pancreas and localize it so the surgeon will know where to find it without too much manipulation (which can be inflammatory to the pancreas). We also want to find any evidence of tumor spread and determine the extent of it. It turns out that CT is much more sensitive than ultrasound when it comes to getting these important answers. Basically, any information that one can get with ultrasound can be obtained by CT. The disadvantage of CT would be that it requires general anesthesia, plus CT is significantly more expensive. 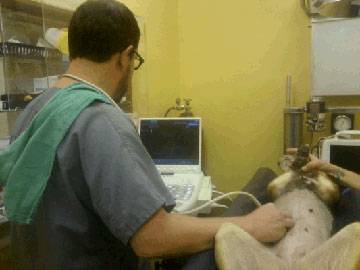 An ultrasound is being conducted. Photo courtesy of DVMSound.

Unfortunately, most insulinomas are malignant but that does not mean they are not treatable. There is more to prognosis than just determining if a tumor is benign or malignant and this is where staging comes in. Insulinomas can be confined to the pancreas (Stage I), spread to local lymph nodes (Stage II), or spread distantly, usually to the liver (Stage III). The therapy goal is to relieve the hypoglycemia and extend the period of normal life quality. Depending on the therapy selected, it is not unusual for the Stage I and Stage II dogs to live a year and a half or more while the Stage III dogs are looking at less than 6 months. Imaging, whether you use CT or ultrasound, is going to be crucial in determining a patient’s stage.

After imaging has been completed, the time has come to decide about surgery.

Surgical removing the insulinoma is the treatment of choice. Even if cure cannot be achieved surgically, removing the majority of the insulin-secreting tissue should make a big difference in the patient’s quality of life so ideally this is the best direction for therapy: locating the tumor (which, as mentioned can be very small) by imaging and removing it.

That said, surgical removal of the tumor is not a simple surgery. Manipulating the tumor can cause insulin surges that result in hypoglycemia during surgery; blood sugar levels must be tightly monitored both during and after surgery. Sugar-containing IV fluids are a must. Further, manipulating the pancreas can create inflammation (pancreatitis) which is associated with pain and nausea.

Some patients have been exposed to excess insulin so long that their normal beta cells require a prolonged period to recover, and during this time the patient may require insulin injections just as a diabetic patient would.

This all sounds like a lot of risk for the treatment of a tumor with a 90 percent chance of malignancy. However, 50 percent of dogs without evidence of tumor spread at the time of surgery have had normal blood sugars for a year after partial removal of the pancreas. This is an excellent statistic and is often well worth the surgery. In one study, dogs receiving partial pancreas removal had a medial remission time of 496 days and the dogs that went on to receive medical management after signs recurred had a median survival of 1316 days. Dogs with medical management alone had a median survival of 196 days.

This drug targets beta cells of the pancreas specifically. To avoid inducing kidney failure, it must be given with aggressive intravenous fluids, thus hospitalization is required for its periodic use. 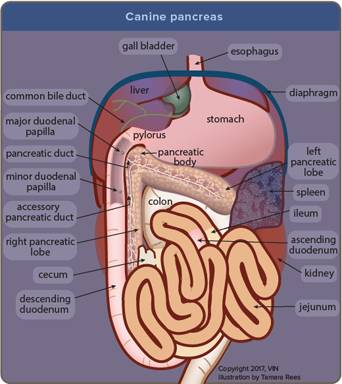