Babesia Infection in Dogs, most people have never heard of Babesia organisms though they have caused red blood cell destruction in their canine hosts all over the world for thousands of years. Babesia organisms are spread by ticks and are of particular significance to racing greyhounds and pit bull terriers. Humans may also become infected.

The Babesia species that infect dogs in North America are:

How Infection Happens and what Happens Next

Rhipicephalus sanguineus: the most common tick to spread Babesia in the United States. Photo by CDC

Infection occurs when a Babesia-infected tick bites a dog and releases Babesia sporozoites into the dog’s bloodstream. A tick must feed for two to three days to infect a dog with Babesia. The young Babesia organisms attach to red blood cells, eventually penetrating and making a new home within the cells for themselves. Inside the red blood cell, the Babesia organism divests its outer coating and begins to divide, becoming a new form called a merozoite that a new tick may ingest during a blood meal. Infected pregnant dogs can spread Babesia to their unborn puppies, and dogs can transmit the organism by biting another dog as well. (In fact, for Babesia gibsoni, which is primarily a pit bull terrier infection, ticks are a minor cause of infection with maternal transmission and bite wounds are the chief routes of transmission.)

Having a parasite in your red blood cells does not go undetected by your immune system. Infected red blood cells are identified and destroyed thus killing the Babesia organisms within them but, unfortunately, if many red blood cells are infected this leaves the host with anemia, a lack of red blood cells. Often the host’s immune system will begin destroying the uninfected red cells as well, a condition called immune mediated hemolytic anemia (IMHA). Symptoms include weakness, jaundice, fever, red or orange colored urine. At least 50% of patients will require blood transfusions.

Making matters worse is the fact that animals seem to get sicker than the degree of anemia would suggest so that there is more to this infection than the destruction of red blood cells. The severe inflammation that is associated with this parasitism can be overwhelming and completely separate from the anemia. Platelet counts can drop, impairing normal blood clotting (especially a problem with Babesia gibsoni). An assortment of neurologic signs can occur with Babesia infection when parasites sequester inside the central nervous system and generate a more localized focus of inflammation. In severe cases there is a lung injury similar to what people with late stage malaria can experience. Babesia conradae seem predisposed to creating liver disease.

If the acute symptoms are relatively mild or at least non-lethal, a chronic infection can develop. This is usually without symptoms but the dog may continue to be a source of infection to feeding ticks. Relapses can also occur with stress.

With luck, the Babesia organisms can be seen on a blood smear. Babesia canis organisms are tear-shaped and occur in pairs. Other Babesia species have several forms in which they appear. Odds of finding the organism are improved by checking freshly drawn blood taken from a capillary source (a small cut to an ear, for example) rather than from a blood vessel. If Babesia organisms are found, the patient is definitely infected but in most cases they are not found so an alternative method of diagnosis is needed. 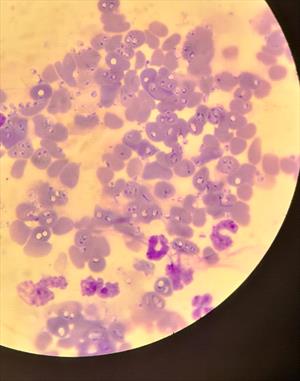 Antibody testing has been problematic as infected animals may have circulating antibodies long after the organism is gone or may have no antibodies circulating while the few organisms remain hidden inside red blood cells.

The newest method of diagnosis involves testing for Babesia DNA. This type of testing is called PCR testing and is extremely sensitive, able to distinguish four different species. This is especially valuable information as the different species are sensitive to different medications.

Current recommendations are to do both antibody testing (serology) as well as DNA testing (PCR) as the information is felt to be complementary. If a patient is strongly suspected to be suffering from babesiosis, treatment should begin promptly without waiting for test results. After treatment is completed, PCR testing should be repeated starting 60 days post-treatment and again two to four weeks after that.

Before 2004, an assortment of unpleasant drugs were used against Babesia with mixed success. What medications you will need to use to treat a Babesia infection turns out to depend on which species of Babesia the patient is infected with. The difficult species seem to be Babesia gibsoni, the one that chiefly involves the pit bull terrier, and Babesia conradae, the one found only in Southern California.

Since 2004 a new protocol has emerged for Babesia of either the gibsoni or conradae species using atovaquone and azithromycin in combination. These two medications stop the reproduction so that the host’s immune system has time to gain the upper hand and remove the organisms without their numbers increasing. Side effects are few to none and improvement is generally obvious within the first week. Unfortunately, atovaquone is expensive and pharmacies are reluctant to sell less than an entire bottle. It is often tempting to use the version of atovaquone that comes combined with proguanil, another anti-protozoal drug, but this version has not be evaluated thoroughly against Babesia and is famous for inducing severe nausea in the dog. Imidocarb, one of the earlier treatments, can be started while the correct formulation of atovaquone is obtained; it is best not to use azithromycin alone in that time or resistance may develop.

If atovaquone simply proves too expensive, the patient can be treated with imidocarb as we used to do in the past until such a time that it is possible to save up for the atovaquone/azithromycin protocol. Imidocarb creates a remission from the physical illness for an extended time but does not actually clear the infection.

If imidocarb is employed, a single dose is usually effective for Babesia canis but two given two weeks apart are needed for the smaller Babesia species. The injection is painful, plus it causes muscle tremors, drooling, elevated heart rate, shivering, fever, facial swelling, tearing of the eyes, and restlessness. Pre-treatment with an injection of atropine helps palliate these side effects.

Occasionally a strain of Babesia gibsoni is resistant to atovaquone. When this happens imidocarb can be used as described above with the addition of doxycycline, clindamycin, and metronidazole for a three-month period.

As for Babesia canis, two doses of imidocarb as described above generally should completely clear the infection. The use of atovaquone appears to be unnecessary.

A vaccine is available against Babesia in France but only seems effective against certain strains. Vaccination is 89% effective in France. The best prevention is aimed at tick control. 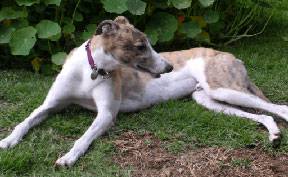 A racing greyhound. Photo by MarVistaVet

Since areas where greyhounds are professionally raced tend to be areas with ticks, racing greyhounds are commonly infected with Babesia. Whether these infections become active remains to be seen as the carrier state seems to be common in infected dogs. As racing greyhounds end their careers and enter the adoption system, Babesia infection is commonly screened. An apparently healthy but positive-testing dog can still be adopted with the understanding that active infection is unlikely but possible. Such a dog could transmit her Babesia infection to other dogs via ticks or bite wounds and should certainly never be used as a blood donor.

The species of Babesia that infected pets should not pose any problems to people with normal immune systems. People with compromised immune-systems or people who have had their spleens removed may have some concerns. In the U.S., babesiosis usually occurs on the East Coast and along the Great Lakes and stems from tick bites. Most symptoms are mild or easily treated but a five percent mortality rate has been reported. The usual organism is Babesia microti.