Pamidronate Disodium (Aredia), When we think of our skeletons, we commonly imagine a structure made of white bones that serves as a supportive scaffold to our softer tissues. It is easy to forget that living bone is an active tissue that grows, remodels, heals, and requires blood flow. Its marrow (pulpy portion in its central cavities) serves as the source of our blood cells. The bone itself stores and releases calcium and phosphorus that our soft tissues need for proper muscle contraction and metabolism. As we exercise and create greater demand on our muscles, our bones must change as well to strengthen and offer greater support. 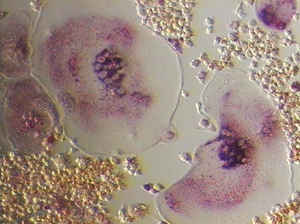 A pair of osteoclasts grown in culture. Photocredit: Cellpath at the English language Wikipedia via Wikimedia Commons

New bone is constantly being laid down by cells called osteophytes and old bone is constantly being removed and reshaped by cells called osteoclasts. In the course of removing bone, the osteoclasts free up calcium for the circulation and are part of the complex hormonal system we use to regulate our blood calcium. The bisphosphonates are a class of medications that inhibit the osteoclasts, causing them to be less enthusiastic in their bone removal process or even killing them. There are several situations where it might be a good idea to interfere with the removal of old bone.

Bone TumorsIn this situation, a cancerous process destroys bone, a painful progression that promotes abnormal fracture. Bisphosphonates can be used to reduce bone destruction by the tumor, which is helpful in managing the pain as well as in strengthening the damaged bone. The most common bone tumor is an osteosarcoma.

Vitamin D ToxicityVitamin D toxicity is not something you normally have to worry about when taking supplements, though potentially it could come up if prescription active vitamin D (which is actually a hormone) is given medically. The most likely situation where vitamin D toxicity might come into play is when vitamin D analog rat and mouse poisons are used.

Research on bisphosphonates is on-going. There is some thought that they kill tumor cells directly and inhibit tumor spread. Pamidronate is one of the most commonly used bisphosphonates in veterinary medicine.

How this Medication is Used

This medication is given as an intravenous (IV) infusion, meaning it is mixed in a large volume of fluid and given over several hours through a vein. When used to lessen bone tumor pain, such infusions are given every three to six weeks.

Pamidronate has the potential to cause damage to the kidneys, which is why it is given as an infusion in a large volume of fluids. At least two hours of infusion seems to be adequate to prevent kidney problems but periodic monitoring of kidney related lab tests is a good idea if this medication is to be repeatedly used.

In humans, bone marrow problems have been reported in conjunction with pamidronate use (reduction in red blood cells, platelets, or increased granulocytes).

Electrolyte imbalances may occur with pamidronate use.

Lab tests relevant to all the above issues are easily monitored. You may wish to discuss a regular testing protocol with your veterinarian if regular pamidronate infusions are planned.

Interactions with other Medications

Monitoring tests become extra important when pamidronate is used with medications that influence blood calcium levels or with drugs for which kidney toxicity is a concern. Other drugs that might be used in the same situations as pamidronate include:

Pamidronate may be a problem for patients with kidney insufficiency. Kidney function should be monitored if bisphosphonates are regularly used.

Pamidronate should not be used in pregnant or nursing patients.

It is our policy not to give dosing information over the Internet.