Snail Bait Poisoning in Dogs, Snails, and slugs are frustrating garden pests wherever anyone is trying to grow tender flowers or ornamental plants. While effective non-toxic methods abound on the internet, snail bait and snail poisons are readily available in most garden supply stores and pose a significant hazard to the pet dogs that share the garden.

Snail bait poisoning continues to be a frequent toxicity issue for dogs in any area where snails are common garden pests.

Not that malicious poisoning is the issue; most cases are accidental as many gardens with snail problems also have resident dogs. Snail bait is typically formulated in pellets and flavored with molasses or bran to attract snails. Unfortunately, the pellets resemble kibbled dog food and the molasses and bran are also attractive to dogs. Snail baits are also available as liquids and powders that can get onto paws and be licked off in normal grooming. Very little metaldehyde snail bait is required to cause poisoning: less than a teaspoon per 10 pounds of body weight.

Many snail bait products also contain insecticides that make them even more toxic. If at all possible, find out what specific product has been involved in the poisoning so that the veterinarian and animal poison control can determine proper treatment.

In a 2002 retrospective study by the ASPCA Animal Poison Control Center, 28 percent of all metaldehyde poisoning cases happened in California.

Signs of poisoning begin fairly quickly after the poison is consumed. The dog will begin anxious twitching, at first only slightly and then uncontrollably. This progresses to seizures and potentially to death. The muscle contractions of the twitches raise body temperature so high that brain damage can result, leading to the colloquial emergency room term “shake and bake” syndrome.

A liver failure syndrome occurs in some patients approximately two to three days after poisoning, so it is important for liver enzymes to be monitored by blood tests throughout the recovery period. Additional liver support medicine may be needed.

Generally, the appearance of a twitching patient is characteristic even if there is no known history of snail bait exposure. Testing of stomach contents or urine for metaldehyde can be done, but is generally not necessary.

There is no direct antidote for metaldehyde toxicity; treatment is aimed at controlling the muscle contractions. If less than one hour has passed since exposure, it may be possible to induce vomiting. If the patient is already twitching badly, the stimulation involved in inducing vomiting may not be in the patient’s best interest. In this case, the patient can be anesthetized and the stomach pumped. Activated charcoal can be given to prevent absorption of metaldehyde into the body from the intestine. Cathartics (used to induce diarrhea) can also be used with the activated charcoal to help remove the metaldehyde from the intestinal tract promptly.

Twitching can be controlled with methocarbamol (a muscle relaxant) or injectable benzodiazepine sedatives such as diazepam. Fluid therapy and body temperature monitoring will be needed through the recovery period.

Potential for complete recovery depends on how much poison was ingested, how quickly therapy was begun, and the general health of the patient. While this is a serious type of poisoning, most patients have a good chance at recovery if treated properly.

At home, the yard should be hosed down with water to dissolve remaining metaldehyde and the dog should be restricted from the treated area for a two-week period.

This page is dedicated to Justin, companion to Saeeda, who did not survive his exposure to metaldehyde. We promised to put up a web page in his honor to help educate dog owners and hopefully save the lives of some snail-bait poisoned dogs around the world. 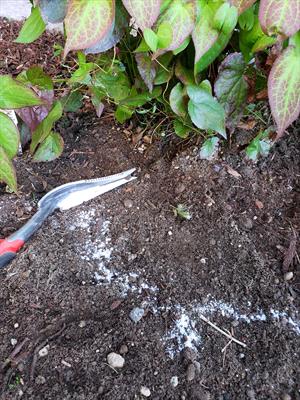 Snails and slugs are frustratin