Splenic Masses in Dogs, The spleen is an oblong organ (some would say it is tongue-shaped) seated just below the stomach. Its consistency is similar to that of the liver. While one can live perfectly well without a spleen, the spleen does provide some helpful services to the body.

Older red blood cells become more brittle than their younger counterparts. As they attempt the tortuous route through the spleen, many older red cells do not make it out the other side. These cells rupture while trying to make the tight turns and their iron is captured and recycled by the spleen. The spleen thus helps remove old red blood cells from the circulation, sort of a clean-up function.

The spleen also performs a function called pitting where it is able to bite off sections of the red blood cells passing through. The areas of the red blood cell that the spleen has designated for it to bite off, or pit, have been marked by the immune system. In this way the spleen can remove red blood cell parasites from the circulating red blood cells, helping keep cells functioning that otherwise might become irreparably damaged if their infection is allowed to persist. Sometimes entire red cells are removed from the circulation in this way, thus preventing the spread of the red cell parasite inside. This sounds like a good thing but it can get out of hand. For example, in feline infectious anemia, the spleen commonly removes so many red blood cell portions that the infection is difficult to detect, plus the patient becomes dangerously anemic (not from the actual parasite but because the spleen removed large numbers of infected red blood cells). In severe cases of this condition, the spleen may have to be removed.

Part of the Lymphatic System

The above functions take place in what is called the red pulp of the spleen. The spleen also contains what is called white pulp, which is essentially part of the lymphatic system, sort of like a lymph node. It serves the same functions as a lymph node but is connected through the circulatory system. Lymph nodes are centers of activity for the immune system, especially antibody producing lymphocytes. Material from the local area of the body drains to the lymph node via the lymph vessels and the lymphocytes may or may not become stimulated into reacting depending on what sort of material is present. A reactive lymph node enlarges (the obvious example is the submandibular nodes that swell when you have a sore throat). The white pulp of the spleen sees material from the circulatory system rather than material from the local lymphatics. Lymphocytes circulate through the splenic white pulp just as they do through the lymphatic vessels, carrying messages involved in the war against body invaders (bacteria, viruses etc.).

Why are Splenic Masses Bad?

Most spleens are removed because they have grown a tumor. Tumors can be benign (like the red pulp hemangioma) or malignant (like the red pulp hemangiosarcoma, white pulp mast cell tumor, or white pulp lymphosarcoma). In dogs, most splenic masses are either hemangiomas or hemangiosarcomas while in cats they are usually either mast cell tumors or lymphosarcomas.

Hemangioma and Hemangiosarcoma: The Most Common Canine Splenic Tumors

Unfortunately, the splenic mass is certain to bleed again and if the spleen is not removed, eventually the patient will bleed to death.

If the splenic tumor is benign, removing the spleen is curative provided that the patient has not lost too much blood to survive the surgery. Ideally, the mass is detected before it has ever bled and the spleen is removed at a time when the mass is not actively bleeding. Of course, if the splenic mass IS actively bleeding and cannot be stopped with pressure wraps, removing it becomes an emergency surgery; it is not appropriate to try to wait until the bleeding has stopped. Expect blood transfusions to be necessary before, during, and possibly after surgery.

If the splenic tumor is a malignant hemangiosarcoma, the spleen can still be removed to control the bleeding but the problem is that hemangiosarcoma is an aggressive cancer. By removing the spleen and primary tumor, the patient is probably spared bleeding to death only to eventually succumb to cancer. Since the decision to go to surgery often hinges on whether or not the tumor is malignant, some effort should be made to make this determination if delaying the surgery can be safely done. Chest radiographs and abdominal ultrasound look for evidence of tumor spread.

If there is evidence of tumor spread, the tumor is malignant and the best control entails removing the spleen and following up with chemotherapy. Many people opt for euthanasia at this point though newer drugs have held promise.

If there is no evidence of tumor spread, it may be possible to effect a permanent cure by removing the spleen although lack of visible tumor spread does not mean the tumor is benign. A piece of spleen tissue for biopsy will be needed to settle the question of malignancy.

How do we Detect Splenic Masses? 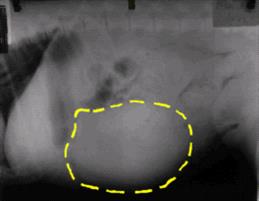 There are several ways to detect a splenic mass. The first way is by physical examination. A large firm mass in the area of the spleen may be felt with the hands during a routine physical examination. From there, radiographs of the belly see if the mass appears to be on the spleen, and chest radiographs see if there is evidence of cancer spread. Based on these findings, plus basic blood work, a decision for or against spleen removal can be made. Unfortunately, many large dogs are simply too well muscled for splenic masses to be detected in this way.

Another method of detecting a splenic tumor comes on the basic blood panel. An unexplained responsive anemia is discovered. A responsive anemia is typical of bleeding (as opposed to an anemia of chronic disease where red blood cells simply are inadequately produced). An older large breed dog with an unexplained bleed is highly suggestive of a splenic tumor. The next step would be radiographs to see if a mass is apparent followed by chest radiographs for tumor spread as above. These findings on the blood panel are especially suggestive of a splenic mass if there has been a history of sudden weakness or collapse typical of a recent bleed. Splenic tumors tend to bleed intermittently (and usually insignificantly) prior to a large bleed that produces obvious symptoms. These smaller bleeds are generally enough to alter the blood panel. If blood work is suggestive of a splenic mass, radiographs can be taken to confirm a mass.

It can be difficult to determine from the radiograph if the mass is coming from the liver or from the spleen.

If you Choose not to Remove the Spleen

Unfortunately, eventually the dog will have a bleed from which he cannot recover. If you think your dog is having a bleed at home, you can apply an ace bandage around the belly in a snug manner to essentially apply pressure to the bleed. This is surprisingly effective and may stave off the inevitable temporarily or until you can get your dog to an emergency hospital for more definitive support such as a blood transfusion. A Chinese herb called Yunnan Baiyo can assist in blood clotting and may be helpful in minimizing the severity of future bleeds.

Chemotherapy may still be an option even if the spleen and its malignant tumor are left behind. A newer approach to chemotherapy, called metronomic chemotherapy, focuses on eliminating the tumor’s blood supply rather than on killing it directly. Lower doses of chemotherapy drugs are used, which leads to far less potential for side effects. If this is something you are considering, consult an oncologist for the most up to date information.

Other Reasons to Remove the Spleen

We have already mentioned the splenic mass as well as excessive red blood cell removal by the spleen as reasons for splenectomy. There are some other situations where splenectomy may be needed.

In this condition, the stomach bloats with gas and twists on its axis effectively cutting off its circulation. This is a huge emergency usually requiring surgery. The issue with the spleen is that it rides just below the stomach so that when the stomach twists, the spleen twists along with it. Frequently the spleen, or part of it, must be removed.

Traumatic Rupture of the Spleen

If the patient suffers blunt trauma to the abdomen, such as getting kicked by livestock or being hit by a car, the spleen may rupture and bleed dangerously. If a tear in the spleen is small, it may be repaired (sewn together) but if the rupture is severe, it may be easiest to simply remove the whole spleen.

The spleen may begin bleeding at any time up until it is actually removed. If this occurs, blood transfusion is likely going to be needed, either with artificial blood or whole blood, depending on what is available. It is possible that multiple transfusions will be needed. A parameter called the packed cell volume (PCV) will be monitored to make sure the amount of circulating red blood cells does not fall dangerously low. If one is lucky, the spleen will not be bleeding at any time during surgery. Some patients must receive blood transfusions prior to splenectomy to ensure they have a reserve of red blood cells in case of surgical bleeding. It may not be known prior to surgery if the tumor is benign or malignant, particularly if there was no time to have an ultrasound before surgery. There is a fair chance that malignancy will be immediately obvious once the belly is opened. Some issues to understand are: